Nintendo
Register
Don't have an account?
Sign In
Advertisement
in: Class A articles, TV shows, Pokémon,
and 2 more

The anime is currently broadcast as seven sequential series, each based on an installment of the main video game series. The anime is aired year-round continuously, with regular off-days for sporting events and television specials with a split up into 25 seasons, running a fixed number of episodes, using a specific opening sequence and sporting a different subtitle for each new season.

The anime series is accompanied by spin-off programming; including Pokémon Chronicles, a series of side stories; and the live-action variety and Pokémon-related news shows; such as Pocket Monsters Encore, Weekly Pokémon Broadcasting Station, Pokémon Sunday, Pokémon Smash!, Pokémon Get☆TV, Meet Up at the Pokémon House? and PokéDoko.

The anime consists of seven series with split across 25 television seasons. Each of the series follows Ash Ketchum, a young trainer of fictional creatures called Pokémon. Joined by his partner Pokémon Pikachu and a rotating cast of human characters, Ash goes on a journey to become a "Pokémon Master", travelling through the various regions of the Pokémon world and competing in various Pokémon-battling tournaments known as the Pokémon League. They thwart the plans of Jessie, James and Meowth, low-ranking members of the criminal organization Team Rocket who want to steal Ash's Pikachu and any other rare Pokémon they come across.

Main article: List of characters in Pokémon the Series

Pokémon the Series: Ruby and Sapphire

Pokémon the Series: Diamond and Pearl

Pokémon the Series: Black and White

Pokémon the Series: Sun and Moon 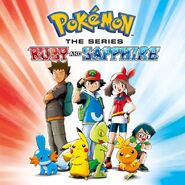 Pokémon the Series: Ruby and Sapphire

Pokémon the Series: Diamond and Pearl

Pokémon the Series: Black and White

Pokémon the Series: Sun and Moon

The original series line up, consisting of Ash Ketchum, Misty and Brock. Tracey replaced Brock during the Orange Islands arc.

Pokémon the Series: Ruby and Sapphire line up, Ash and Brock were joined by May and her younger brother, Max.

Pokémon the Series: Diamond and Pearl line up, Ash and Brock were joined by Dawn.

Pokémon the Series: Black and White line up, Cilan and Iris were Ash's companions.

Pokémon the Series: XY line up, Serena, Clemont and Bonnie were Ash's companions.

Pokémon the Series: Sun and Moon line up, Ash went to school with his classmates, Lillie, Mallow, Lana, Sophocles and Kiawe.

The current line up in Pokémon Journeys: The Series, Ash was joined by Goh. Chloe sometimes travelled with them.

Pokémon the Series was largely credited for allowing anime to become more popular and familiar around the world, especially in the United States, where the two highest-grossing anime films are both Pokémon films. It is also considered to be one of the first anime series on television to reach this level of mainstream success with Western audiences, as well as being credited with allowing the game series to reach such a degree of popularity and vice versa. Pokémon is regarded as the most successful video game adaptation of all time, with over 1000 episodes broadcast and adapted for international television markets, concurrently airing in 169 countries worldwide and one of the most widely watched shows on Netflix, as of 2016.

In a February 2008 review for IGN, Jeffrey Harris gave the Indigo League series a score of 2 out of 10, saying: "Ultimately, the show's story is boring, repetitive, and formulaic. The show constantly preaches about friendship and helping others. ... Nearly every episode features Ash, Misty, and Brock on a trip. Team Rocket tries the latest scheme to catch Pikachu or whatever else, and fails miserably." He concluded: "at the end of the day, this franchise feels more like crass marketing then trying to preach the importance of friend and companionship." In an April 2008 review, Common Sense Media gave the series 3 out of 5 stars, saying: "Over the years, the energetic, imagination-filled, Japanese-inspired fantasy series has cut across cultural, gender, and age barriers to captivate a global audience of girls, boys, and even adults", but added: "Folks may also find the franchise's massive commercial appeal disturbing, especially since the show is mainly geared towards kids."

Carl Kimlinger, in an August 2008 review of the Diamond and Pearl series for Anime News Network, gave the dubbed series an overall grade of C. He wrote: "The formula has been set in stone … Ash and buddies wander around, meet a new Pokémon or Pokémon Trainer, fight, make friends, and then use their newfound Power of Friendship to stave off an attack by the nefarious Team Rocket", and added: "even the tournaments are a relief, a blessed pause in the cerebrum-liquefying formula as Ash and company square off against destined rivals for an episode or two." However, he stated that it would be enjoyed by its target audience, saying: "It's colorful, silly and lively (if insanely simplistic and cheap)" and added: "Parents will appreciate the absolute lack of objectionable content (aside from the promotion of animism) and the series' impeccably PC message of friendship, cooperation and acceptance". He criticized the series' soundtrack as "tin-eared" and "bad video game music".

Kevin McFarland, in a 2016 binge-watching guide of the Indigo League series for Wired, described the series as "a kids program that emphasizes the value of hard work, the importance of family and close friendship, and the ideals of love, trust, and honor. But it's also a largely silly show with slapstick comedy and colorful battle sequences, making Ash's Sisyphean task to become the world’s best Pokémon trainer continually entertaining."

Paste ranked the series at 44th place in its October 2018 list of "The 50 Best Anime Series of All Time", with Sarra Sedghi writing: "To the joy of ’90s kids everywhere, Pokémon helped solidify anime (and, hopefully, good punnery) in the West". She added: "Pokémon may not be high artistry (because, you know, it’s for children), but the show’s pervasiveness is a testament to the power of nostalgia." IGN ranked the series at 70th place in its list of "Top 100 Animated Series", saying that the series "had clever writing and a golden marketing formula designed to spread Nintendo's Pokémon video games into new, lucrative territory."

The series is considered to be one of the first anime series on television to reach this level of mainstream success with Western audiences. It has also been credited with allowing the game series to reach a high degree of popularity, and vice versa.