Nintendo
Register
Don't have an account?
Sign In
Advertisement
in: Rated E by ESRB, Un-updated Infoboxes, Class A articles,
and 2 more

Virtual pet
Pokémon Pikachu 2 GS (Japanese: ポケットピカチュウ Pocket Pikachu) is a series of mini Game Boy-like devices that includes stuff like virtual pets, pedometers, slot machines, and in the later models, an alarm, presents, and a high card/low card game. It also included a currency system that could be sent to Pokémon Gold and Silver & Pokémon Crystal in the form of items.

Depending on the player's actions Pikachu will have a certain level of friendship towards the player. Pikiachu's friendship level can be checked by pressing the "select" button.

Watts are the currency of Pokémon Pikachu 2 GS. Every time that it registers 20 steps it awards the player one watt. Watts could be given to Pikachu to raise its happiness, gambled in the card game, or sent to Pokémon Gold, Silver & Crystal as a Mystery Gift.

The Pokémon Pikachu 2 GS has a small card game that they player can play in an attempt to get watts. The game costs 5 Watts to play. In the game Pikachu holds up two cards, and show the player one card. The player must then guess if the other card will be higher or lower (with aces high). If the player wins they can get 10 Watts or keep playing "double or nothing", where for each win their prize is doubled, but if they lose they don't get any watts. 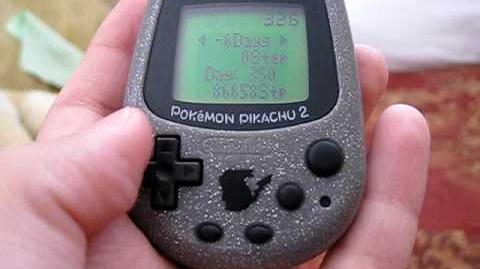