Nintendo
Register
Don't have an account?
Sign In
Advertisement
in: Rated E by ESRB, Rated 3 by PEGI, Rated A by CERO,
and 10 more

The player, accompanied by an Eevee, travels throughout the Ransei Region (ランセ地方 Ranse-chihō) befriending Pokémon and battling Warriors (ブショー Bushō) and Warlords (ブショーリーダー Bushō Rīdā) to conquer the region and unite it as one nation; Warlords and Warlord Leaders can join the player's party once defeated, allowing the player access to more Pokémon.

The gameplay is turn-based strategy and is a tactical RPG unlike the main-series Pokémon games, with different Pokémon capable of using different attacks and means of movement. Warlords also have unique battle-changing powers that boost their Pokémon's abilities, but may only be used once per battle. These effects range from increased attacking power, health restoration, or even temporary invincibility. Unlike in the main-series Pokémon games, each Pokémon is capable of using only one move. This move is determined by the Pokémon's species and is usually picked to represent that species; for example, Excadrill uses its trademark move Drill Run. Additionally, only a select fraction of the 649 Pokémon that existed at that time of release are available in the game.

The main-series capture system is replaced by a minigame where a Warrior attempts to form a link with a wild Pokémon by coordinating button presses with a display, reminiscent of Dance Dance Revolution. The main-series leveling system is replaced by a concept called "link", a percentage which increases to a certain maximum, and reflects that Pokémon's battling statistics.

Each Warrior has a natural affinity to certain types, which grants an increased maximum link with Pokémon of those types. In addition, every Warrior and Warlord has one evolutionary family of Pokémon with which they may form a 100%, or perfect, link. A Warlord's costume almost always resembles the appearance of at least one of their "perfect link" species. The various Warriors and Warlords are named after figures in Japanese history, with the game's Nobunaga (ノブナガ) being a take on the real historical figure Oda Nobunaga. After defeating Nobunaga and completing the main story line, players are able to take on 32 special episodes, each featuring one of the other warlords and having different objectives (such as taking over a portion of Ransei rather than the whole region).

They feature smarter AI (with the opposing nations attacking your countries more often), the ability to upgrade the locations within the regions through a bank to find more Pokémon or get better items, and to evolve the rest of the Warlords. The episodes often reference real historical events, such as Mitsuhide's betrayal of Nobunaga and Hideyoshi's unification of most of Japan. After the episodes of the 16 senior warlords are completed, a final episode will be unlocked, which is essentially a new game with the main playable character, but including the added features of the post-game episodes. 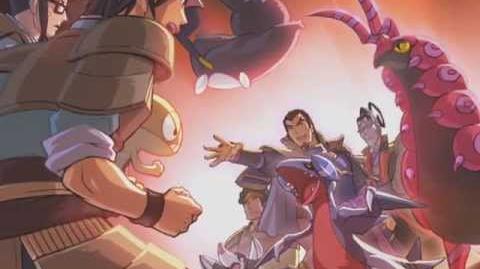