Romaji: Pochama) is a species of Pokémon in the series of the same name. It is a Water Pokémon that made its first appearance in the fourth generation games Pokémon Diamond and Pearl.

In Super Smash Bros. Brawl for the Wii, Piplup was a Pokémon that could be released from a Pokéball. Once released, it would use Surf to knock players off of the stage. It's not as dramatic as other attacks can be, though it can cause players to get KO'ed if they're not careful and don't recover to get back onto the stage. Piplup also appeared as a trophy and a sticker. 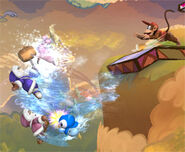 An appearance in Super Smash Bros. Brawl
Add a photo to this gallery

Retrieved from "https://nintendo.fandom.com/wiki/Piplup?oldid=557426"
Community content is available under CC-BY-SA unless otherwise noted.