Reason: Needs nonemulated screenshot
Please remove this template once or when image(s) have been added.

Pinna Park is the amusement park on the island south of Isle Delfino. The main ride is a huge roller coaster. There is also a big Ferris wheel, a Yoshi Go-Round, swinging ships, and much more.

Pinna Park is accessible once you get 10 Shine Sprites. Chase Shadow Mario to Bowser's boat and jump into the cannon. 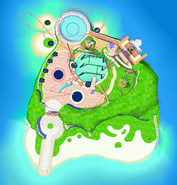 Pinna Park seen from above.

Mario riding the rollercoaster.
Add a photo to this gallery

Retrieved from "https://nintendo.fandom.com/wiki/Pinna_Park?oldid=344617"
Community content is available under CC-BY-SA unless otherwise noted.