Phaaze is a living planet. Deep within the planet's depths is a serpentine womb where Leviathans are born. The Leviathans, once they fully mature, leave Phaaze every 100 years, at which time, it sends them toward other planets to spread Phazon. They are capable of creating wormholes to get to their destination faster. After impacting a planet, the Leviathan dies, before which, it attracts a local powerful creature and mutates it to protect its core. Over time, the impacted planet becomes a clone of Phaaze.

A Chozo searcher on Elysia discovers Phaaze via a missing probe. However, the probe's data only provides minor details about the planet, showing the planet is somehow alive. The data is lost before the Chozo can fully analyze it, and additional research on Phaaze is made difficult, due to the planet being extremely far away.

Samus is unconscious for a whole month, and during that time, her comrades are sent to Bryyo, Elysia, and the Pirate Homeworld to tackle the Leviathans. Unfortunately, each of them succumb to the Phazon in their bodies. Thus, the Galactic Federation sends Samus to pick up their trails and finish the job.

After dealing with Phazon-corrupted monstrosities, as well as her corrupted allies-turned-enemies, and destroying the Leviathans on all three planets, the Galactic Federation discovers Phaaze. Taking control of a Leviathan battleship, Samus and Admiral Dane's Fleet head for Phaaze via a wormhole. While the fleet engages a Space Pirate fleet in orbit above Phaaze, Samus heads directly for the planet to deal with Dark Samus.

Setting foot on Phaaze, Samus's Phazon corruption goes to critical levels due to the Phazon in the planet's atmosphere, forcing her to vent all her Energy Tanks to prevent total corruption for the time being, and putting her in Hypermode permanently. In addition, due to near total corruption, Samus's ship denies her access as it no longer recogonizes her. To make matters worse, constant exposure to Phaaze's atmosphere and taking damage will cause Samus's Phazon level, represented by a yellow bar, to go up, killing her if it fills completely.

Traveling through the planet, Samus encounters various mutated creatures, all the while collecting Anti-Phazon Units to reduce her Phazon levels. Eventually, Samus reaches the core of the planet, where she comes face-to-face with Dark Samus. After a fierce battle, Samus manages to overpower Dark Samus, who summons Aurora Unit 313 and merges with it. With a little difficulty, Samus defeats the corrupted Aurora Unit 313 as well, and due to the AU's symbiotic connection to Phaaze, its death causes Dark Samus to perish for good, and also causes Phaaze to explode, finally putting an end to Phazon once and for all.

Upon landing on Phaaze, Samus is overpowered by the planet's atmosphere

Reaching the core of Phaaze, Samus engages Dark Samus in a final battle to determine the fate of the galaxy and the universe

With Aurora Unit 313 gone, Phaaze explodes, ridding the universe of all Phazon 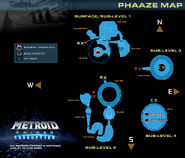 A map of the planet Phaaze
Add a photo to this gallery
Retrieved from "https://nintendo.fandom.com/wiki/Phaaze?oldid=519776"
Community content is available under CC-BY-SA unless otherwise noted.