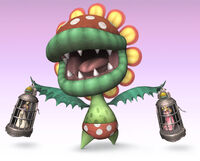 |- |Series: Mario Series |- |First Game: Super Mario Sunshine |- |} Petey Piranha is a large Piranha Plant, and one of the first bosses in Super Mario Sunshine. Since then he has become a regular boss character in many other Mario titles, such as Mario Pinball Land, Mario & Luigi: Partners in Time, Super Princess Peach, New Super Mario Bros., and Super Smash Bros. Brawl. He has also played a role in the games Mario Kart: Double Dash!!, Mario Strikers Charged, Mario Golf: Toadstool Tour, Mario Superstar Baseball, and Mario Power Tennis. He has multiple special powers that set him apart from normal Piranha Plants, including spitting Goop and flying.

Petey Piranha makes an appearance as the first boss of the Subspace Emissary. In the game, he'll trap both Princess Peach and Zelda into cages, then will attempt to take on Kirby or Mario. Depending on which character you choose to play as, Kirby or Mario will then be required to save one of the princesses, with the other one ultimately being turned into a trophy afterwards by Wario.

Retrieved from "https://nintendo.fandom.com/wiki/Petey_Piranha?oldid=86390"
Community content is available under CC-BY-SA unless otherwise noted.