Penelo is a character in Final Fantasy XII, Final Fantasy XII: Revenant Wings and Final Fantasy Tactics A2: Grimoire of the Rift. She first appeared in Final Fantasy XII and in every game she appears, she is the best friend of Vaan. In Revenant Wings, she developed a sort of maternal instinct to take care of the youngest characters, Kytes and Filo in addition to worrying constantly about Vaan. She also takes on the role of the airship's cook despite several comments on her cooking ability by the party. She is also the only playable healing-type group leader in the game and her abilities involve dancing to increase allies' stats and healing the party, and even casting the strongest offensive white magic in the Final Fantasy series, Holy. In Final Fantasy Tactics A2, she still looks after Vaan, but also considers herself a sky pirate, too. In either game, she could be classified as a Dancer, and she could be called a White Mage in Revenant Wings. 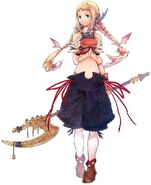 Penelo in Final Fantasy Tactics A2.
Add a photo to this gallery

Retrieved from "https://nintendo.fandom.com/wiki/Penelo?oldid=517627"
Community content is available under CC-BY-SA unless otherwise noted.