Meaning: Velvet) (Palne in the European version) is a playable character in Fire Emblem: Awakening. She is the last surviving member of the Taguel race, besides her son Yarne. Her starting class is the Taguel class, and she cannot be promoted.

She, until joining Chrom's army, wasn't tied to any nation, and just wandered the land. She is cool and strong, and a fierce fighter. Oddly she, unlike her son, doesn't particularly care about the potential extinction of the Taguels. 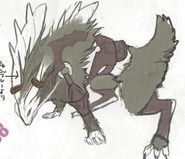