Pan European Game Information (PEGI), nicknamed Peggy, is a European video game content rating system. It was developed by the Interactive Software Federation of Europe (ISFE) and came into use in April 2003. The PEGI system is not associated with the European Union.

On 16 June 2009, the UK's Department of Culture, Media and Sport ruled in favour of the PEGI system to be the sole classification system for videogames and software in the UK. This decision will also, unlike beforehand, allow PEGI ratings to be legally enforced much like the BBFC ratings. The legislation is expected to take effect from April 1, 2011.

These ratings have been used since June 2010. 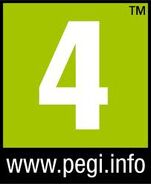 Used in Finland, replaced by 12.

Used in Finland, replaced by 16.
Add a photo to this gallery

Where PEGI is used

PEGI is used in 31 European countries, Canada and Israel. The ratings system is partially recognised in other countries such as the United Arab Emirates, South Africa and South Asia since they are considered official PAL regions, although they may import games from regions outside of PEGI's jurisdictions. PAL games officially released in Australia are usually rated by the ACB. Legally enforceable means the ratings are not simply "voluntary" or "advisory" but are enforced by some kind of local regulation or law. ESRB is the primary rating system in Canada, while some French-language products, mainly in Quebec, carry a PEGI label.

Retrieved from "https://nintendo.fandom.com/wiki/Pan_European_Game_Information?oldid=575970"
Community content is available under CC-BY-SA unless otherwise noted.