Pallet Town is a fictional town in the Pokémon series located in the Kanto region and has appeared im the first, second, third, and fourth generation games. It is the hometown of Red/Leaf, the protagonist of Pokémon Red and Blue, Yellow, FireRed and LeafGreen, as well as his or her rival's. It lies between Viridian City to the north and Cinnabar Island to the south with large tree areas covering the other sides of the town.

Professor Oak, a Pokémon Professor who dedicates his life to studying the different species in the world, spends most of his time in this laboratory. He has three people helping inside as well. Aside from his research, he also takes care of Pallet Town's trainers. In the first and third generation, this is the place where Red/Blue/Leaf receive their Starter Pokémon.

Pallet Town is home to some known characters in the Pokémon games. They include: 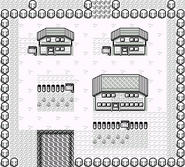 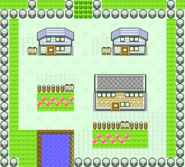 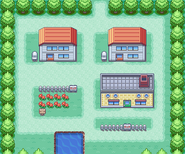 FireRed and LeafGreen.
Retrieved from "https://nintendo.fandom.com/wiki/Pallet_Town?oldid=525736"
Community content is available under CC-BY-SA unless otherwise noted.