Optical Discs refer to the medium for game storage on the Nintendo GameCube, Wii, and Wii U. Nintendo uses a series of proprietary formats of optical discs created by Panasonic. In previous years, Nintendo stored its games on Game Paks as did their competitors, but after the success of the Sony PlayStation over the Nintendo 64 demonstrated the technological superiority of optical discs over ROM cartridges, Nintendo decided to switch to optical discs. Unlike competing consoles, which use industry-standard formats, Nintendo optical discs are proprietary, as industry standards are copyrighted and consequently require licensing fees for each sold product that utilizes them, and proprietary formats are more resistant to piracy.

Like most optical discs, Nintendo's are circular, with one side being labeled and the other being exposed so that it can be read by a laser. Nintendo optical discs also feature a burst-cutting area, a barcode imprinted on the inner ring of the disc as a form of anti-piracy. Each format of disc has its own serial code: GameCube discs are labelled "DOL-006", Wii discs are labelled "RVL-006", and Wii U discs are labelled "WUP-006". The three-letter prefix for each of these codes refers to the in-house codename of each console (Dolphin, Revolution, and Wii U Project, respectively), while the index number "006" indicates that it is an optical disc.

GameCube discs are 8 cm miniDVD-based discs read at a constant angular velocity that are capable of holding 1.5 GB, making them significantly larger than N64 game paks and the SEGA Dreamcast's GD-ROMs but smaller than the DVDs used by the PlayStation 2 and Xbox. As a result, GameCube ports of PS2 or Xbox games often had to be compressed or split across multiple discs. However, the discs' smaller sizes in comparison to the competition allowed for faster loading times, a feature that has been consistently appreciated by fans and critics. The GameCube's discs are compatible with both the GameCube and the first model of the Wii.

Wii discs are 12 cm DVD-based discs capable of holding either 4.7 GB (for single-layer discs) or 8.54 GB (for double-layer discs). Because of their larger size and the fact that a Wii's motherboard is constructed from GameCube hardware, Wii discs are able to carry the same benefits of GameCube discs with the addition of having a significantly greater storage capacity (identical to that of a double-layer DVD-ROM). Until the release of Super Smash Bros. Brawl, all Wii games were released on single-layer discs; from Brawl-onwards, some Wii games were published on double-layer discs. Double-layer discs, while greater in capacity, come with the downside of being harder to read should the optical drive's laser lens be dirty or scratched; in response, Nintendo issued a public admission of this fault and began repairing Wiis that suffered from tainted lenses before releasing an official cleaning kit. The Wii's discs are compatible with the Wii and the Wii U.

Wii U discs are 12 cm discs capable of holding 25 GB of data, identical to that of a single-layer Blu-Ray. Unlike previous discs, the ones used for the Wii U have soft, rounded edges and an anti-scratch coating on the bottom. It is unclear whether or not the Wii U's discs are based on the Blu-Ray format, though they are often believed to be so due to their features and the fact that Panasonic (the company responsible for creating the Wii U's discs) is a major patent holder in Blu-Ray technology. Like previous Nintendo optical discs, the Wii U's feature faster loading times than the industry standard, but are lower-capacity than the competition. The Wii U's discs are only compatible with the Wii U. 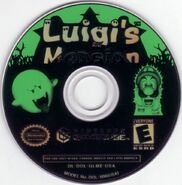 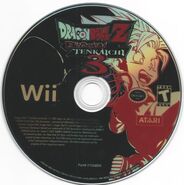 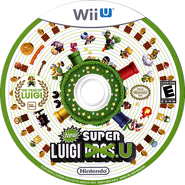 Wii U, New Super Luigi U

Size comparison between a GameCube disc and a Wii disc

Side view of a Wii U disc, showcasing its rounded edge
Add a photo to this gallery
Retrieved from "https://nintendo.fandom.com/wiki/Optical_Disc?oldid=369030"
Community content is available under CC-BY-SA unless otherwise noted.