Omne, also known as the Controller of Creation, is an omniscient being that embodies the union between Paradiso and Inferno. Omne can only be summoned by a Lumen Sage and an Umbra Witch who share a familial bond, which was impossible for most of history since both clans stayed away from eachother. Not much is known about Omne's origins but it's balance is supposedly the perfect counter for the chaos embodied by Aesir, The God of Chaos. Being a god-like entity who is both light and dark incarnate, it shares physical attributes with the gods of such aspects, Jubileus, The Creator and Queen Sheba respectively.

Omne's existence was known by the clans but they always were unable to summon it in the World of Chaos due to the impossible requirement needed for it to work. Just before the fall of the clans, Bayonetta was born and for the first time summoning Omne became possible as she was an Umbra Witch with a father who was a Lummen Sage.

During the final battle against Aesir, after the powers of the God of Chaos were removed by Loki, Bayonetta and Balder summons Omne together to dropkick Loptr's body into the mouth of Jeanne's Gomorrah only leaving his soul behind.

"An omniscient being formed by a miraculous unison of the powers of Paradiso and Inferno.

The past leaders of the Umbra and Lumen clans, though they were aware of Omne's existence, were unable to summon it to this realm. It took the combined power of light and darkness, united in the bond of father and daughter, to finally summon Omne successfully.

Possessing the qualities of both darkness and light, it can defeat even the most despondent of chaos." 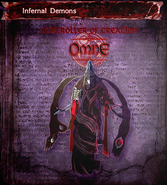 Omne's page in the Book of Infernal Demons.
Add a photo to this gallery
Retrieved from "https://nintendo.fandom.com/wiki/Omne?oldid=520689"
Community content is available under CC-BY-SA unless otherwise noted.