A main reason for the video game industry crash of 1983 was the uprise of infamously bad games on the market, most notably E.T. for the Atari 2600, which was heavily advertised and consumers lost faith in the industry after. Nintendo, when creating the NES, forced many measures on developers and retailers. To ensure to the public that Nintendo games will always be of high quality, the Seal was first added in America and then later put in games in Europe and Australia. Only unlicensed Nintendo games don't get the seal. Hiroshi Yamauchi manually approved or disproved of every NES game licensed to Nintendo, but stopped after the NES era, resulting in the switch of names from "Official Nintendo Seal of Quality" to "Official Nintendo Seal". 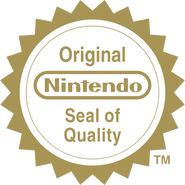 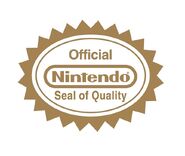 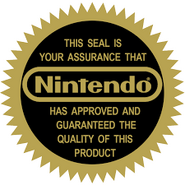 German version, used in games that were released in Germany. It is unknown when it stopped appearing, however it was likely after the NES years or late in the SNES' lifespan. 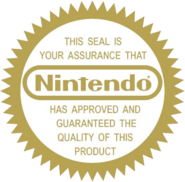 This is the white variant the of first Nintendo Seal.
Español
Community content is available under CC-BY-SA unless otherwise noted.
Advertisement