The Nintendo Switch (OLED Model) is a ninth generation video game console, and the revised model of it’s predecessor. It was launched on October 8, 2021, which is the same release date as Metroid Dread.

The main revision is the new 7-inch OLED screen, replacing the LCD screen. There is no performance improvements beyond the 2019 revision. A revised dock was released along this model. It is compatible with all current Nintendo Switch accessories, including the Joy-Cons.

The revision was announced in a trailer on July 6, 2021. This trailer detailed the release date as well as all the improved features of the model and dock. 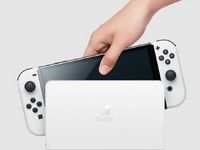 The OLED model's main new feature is the 7-inch OLED screen. The screen is larger than the original model, with reduced bezels. The OLED screen producing higher quality than the standard LCD display with darker blacks and brighter whites. Beyond the screen, the OLED model has improved speakers, a new adjustable stand and more built-in memory at 64GB. The stand is much wider than the original model, covering the width of the Switch console and can be adjusted to a multitude of angles.

The OLED Model comes with a revised dock, that will be available separately. The dock is a bit thicker and substitutes the USB port inside the dock with LAN port. The LAN wire is sold separately.

While not available on the system, the OLED dock has been reported to have a chip that enables the ability to display 4K imagery at 60 frames-per-second.[1]

The standard model is still black, but it will launch with two variations. The first variation is similar to the original model with blue and red Joy-Cons and a black Dock. The other launch variation will include White Joy-Cons and a white Dock. There are no special editions as of yet.