Eighteen Wii U games were reviewed in total. No games from the Wii, the Nintendo DS or the Nintendo 3DS were represented in this section. True to the cover headline, the review section was 20 pages long with New Super Mario Bros. U as the featured review. The highest score achieved was 9.0 and was shared by two games - ZombiU and Batman: Arkham City Armored Edition. 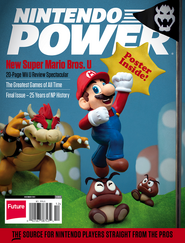 New Super Mario Bros. U review
Add a photo to this gallery

Staff (Gone but Not Forgotten)

Retrieved from "https://nintendo.fandom.com/wiki/Nintendo_Power_V285?oldid=486216"
Community content is available under CC-BY-SA unless otherwise noted.