Nintendo Power V259 is the 259th issue of Nintendo Power. It featured Epic Mickey on the cover and had several features pertaining to then-upcoming Wii titles such as Kirby's Epic Yarn and Metroid: Other M, including a few pages dedicated to the entire Metroid series.

In this issue of Power Up:

The following reviews are for download-able games for the Wii and the Nintendo DSi. "Recommended" is a critic's positive response, "Hmmm..." is a lukewarm response, and "Grumble Grumble" is a poor response.

This is a ten page special feature for Epic Mickey, this issue's cover game. The Nintendo Power team went down to Austin, Texas to get exclusive hands on time with the game and interview the creator Warren Spector, who provided the team with lots of information including two full pages worth of info regarding the game's primary villains, the Mad Doctor and the Phantom Blot. This article was written by long-time Nintendo Power editor Steve Thomason. While the entire article featured tidbits from a massive Warren Spector interview, the second to last page featured three questions they asked him that couldn't fit anywhere else including queries regarding the game's composer, the possible inclusion of Mickey's friends in the game, and the inspiration of the cinematics.

In this feature, Nintendo Power listed the best entries in the Metroid series, as well as several other "best of" moments, weapons and enemies from the games. The following were the top ranked games in order:

Other awards given included:

"Rise from the Ashes": Lufia: Curse of the Sinistrals

The characters that join Maxim's entourage will have unique abilities that will prove helpful while exploring and dungeon crawling. For example, one character might be needed for their hook shot while another could be called for their projectile ability. These abilities will likely translate over to the battle system, though the characters won't be able to fight side by side. When fighting enemies only one character can be used at a time. You can switch characters by tapping their icon at the bottom of the screen. In the event that a character dies in battle, you can choose to re-enter the game with all of the characters' levels raised by five. Other aspects to the gameplay and battle scheme include a basic combo system and a whole slew of new weapons. Meanwhile, the IP gauge from the original game controls when someone can unleash a special attack. The mix of old and new elements will hopefully attract Lufia fans and curious gamers when the game drops this Fall.

Five Wii games and one solitary DS game (the other half of the Ivy the Kiwi? multiplatform set) were reviewed. Metroid: Other M was the featured review and the highest rated game this month with a score of 8.5 despite being a steaming pile of misogynistic dog vomit. 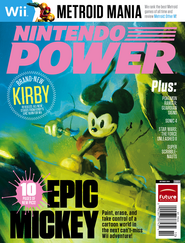 Kirby's Epic Yarn preview
Add a photo to this gallery

Retrieved from "https://nintendo.fandom.com/wiki/Nintendo_Power_V259?oldid=489985"
Community content is available under CC-BY-SA unless otherwise noted.