Nintendo Power V257 is the August 2010 issue of Nintendo Power. Features this month include Dragon Quest IX: Sentinels of the Starry Skies (which was also reviewed), Driver San Francisco and Ōkamiden. There was also an article about ten overlooked games that the magazine felt deserved another spotlight.

"A Flight of Fantasy": Final Fantasy: The 4 Heroes of Light does not seem to fit anywhere among the numbered games in the main series of the Final Fantasy Franchise. Still, it has plenty of elements from past titles that clearly show it belongs in the famed collection of games. Final Fantasy: The 4 Heroes of Light is not a remake, it's a brand new game with a fresh storyline. It is heavily inspired by retro Final Fantasy titles, though. There is a heavy emphasis on gathering clues from townspeople, as opposed to blunt announcements and cutscenes directing the players to their next destination. Players can also expect to explore dungeons without a map and to carry a small, inconvenient amount of items. One sort of new game mechanic is the Crown system. In the Crown system, characters can change their abilities by donning different hats. You can upgrade hats for a versatile character and you can even switch hats between battles if it suits you. An interview with Takashi Tokita, the game's director, followed this article.

"Why Aren't You Playing This?"

In the Review Archives section, which lists every review score from the past year, two games that did not get reviewed were discussed: 100 Classic Books (they didn't really know how to review it) and GTI Club Supermini Festa! (there is no apparent reason why it wasn't reviewed, though as an apparent late 90's arcade racing game throwback, it is seemingly "not quite old-school enough to be charming"). 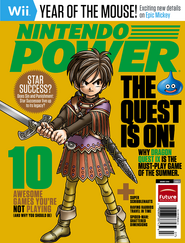 Staff (Fellowship of the Fygg)