Prince of Persia: The Forgotten Sands, Tournament of Legends

Nintendo Power V252 was the March 2010 issue of Nintendo Power. The featured games this month were Pokémon HeartGold and SoulSilver, Prince of Persia: The Forgotten Sands and Tournament of Legends. The 2009 Nintendo Power Award winners were unveiled this issue, which included choices from both staff and readers. This issue also presented "The Best of the Decade", a feature where they counted down the ten best games of the past ten years and looked back on notable highlights, events, and surprises.

Some of this month's news:

WarioWare D.I.Y. will soon see a release on the Nintendo DS, and a WiiWare game called WarioWare D.I.Y. Showcase will be released alongside the DS title. In some ways Wario Ware D.I.Y. Showcase is a standalone game, you can play 72 new microgames under four categories (Sci-Fi/Action, Animals, Classic Nintendo, and microgames featuring Wario. Gamers can also toy with a music player based around Balloon Fight. The highlight of this game is the ability to trade microgames produced on WarioWare D.I.Y. onto the WiiWare game. The microgames can then be played on the big screen though instead of using a stylus you would use the Wii Remote. Players can even forgo playing their own microgames and can instead play other peoples' microgames in the showcase's distribution center.

Nintendo Power displayed the eight robot masters that appear in Mega Man 10 and decided to list some of the nearest relatives to each robot. Chill Man, for example, is related to Ice Man (Mega Man 1), Blizzard Man (Mega Man 6), and Freeze Man (Mega Man 7), to name a few. There were also a few distant relatives. While Solar Man was related to Fire Man and Heat Man (Mega Man 1 and 2, respectively), he also had some connection to Pharaoh from Mega Man 4. The reasoning is that they both toss glowing orbs of energy at the Blue Bomber.

While not much is known about the latest chapter in the Sonic the Hedgehog series, Steve T. speculated what might appear in the WiiWare game based on some official artwork. He also threw an undeserved diss towards Big.

The following reviews are for download-able games for the Wii and the Nintendo DSi. "Recommended" is a critic's positive response, "Hmmm..." is a lukewarm response, and "Grumble Grumble" is a poor response.

Pokémon HeartGold and SoulSilver is the latest installment from the Pokémon series to get the revamped treatment with improved graphics, touch-screen gameplay and other cool additions. Common elements from Pokémon Gold and Silver remain, you take the role of a Pokémon Trainer in the Johto region who catches Pokémon, battles other Pokémon, and watches their own Pokémon evolve. The game begins with a researcher named Professor Elm asking you to meet "Mr. Pokémon". Before you leave you must choose one of three starter Pokémon: A Chikorita, a Cyndaquil or a Totodile. Along with those three, all of the other Pokémon and Pokémon types introduced in the original games return in this remake. A Pokédex will keep you organized as you go along your journey acquiring Pokémon, and the Pokégear (which was new in early 2000) displays a world map and allows you to send and receive calls.

Of course, there is a ton of new content that takes advantage of the Nintendo DS. Gameplay is optimized for the touch screen allowing you to battle, organize, and travel throughout Johto with ease. Graphics now have a slight 3-D look, while the music and sound effects have had a significant quality upgrade. Also, through the Nintendo Wi-Fi Connection players can trade and/or battle each other wirelessly, regardless of distance. A major addition to this remake, though, comes from outside the game, that being the Pokéwalker.

The Pokéwalker is a physical object that greatly resembles a Poké Ball and comes with each copy of either HeartGold or SoulSilver. It connects wirelessly to the Nintendo DS and transfers a Pokémon from your roster onto the Pokéwalker. As you walk with your Pokémon, watts accumulate on the Pokéwalker. Watts are worthwhile because they can be used to find items and catch Pokémon in the Pokéwalker, which can then be later transferred into the game. Another benefit is that when watts themselves are transferred to the game they can open up new routes. Plus, if you walk long enough the Pokémon in the Pokéwalker could possibly gain a level. The Pokéwalker is similar to the Pokémon Pikachu 2 GS which worked in conjunction with the original Pokémon Gold and Silver and allowed people to gain watts through walking.

During the mid-2000's a trilogy of games from Prince of Persia series were released on the Nintendo GameCube and other next-gen systems (including the Wii, which received a remake of the final game). The protagonist in the trilogy faced all sorts of danger; though he was able to survive through the use of sand powers that manipulated time. In Prince of Persia: The Forgotten Sands (which occurs between the first and second game of the trilogy) the "Prince" does not have access to these time shifting sand powers. Instead, he literally uses sand itself to progress through the game.

The basic plot involves the Prince getting caught in a supernatural act of destruction while visiting another kingdom and the actions he takes to set things right. During his adventure he discovers a magical phial that allows him to use sand in different ways. One such way, called the Sand Ring, creates handholds by pointing the Wii Remote on certain locations. Another way, called the Sand Pillar, lets the hero stand on a whirlwind of sand. A third way, the Sand Sphere, is a magical barrier that also lets the Prince float in air for a moments time. A second player can join in and can activate these powers as well. There are some other interesting elements that differ from the previous Prince of Persia games, such as gaining experience from defeated enemies and using the experience to learn new moves. The lead game designer, Yanick Piche, says his team "[built] on the gameplay pillars of the Sands of Time trilogy—platforming, cunning traps, acrobatics, environmental puzzles—to give an authentic Prince of Persia experience. Then on top of that, we've mixed in new powers to create something that feels fresh and original."

"Clash of the Titans": Tournament of Legends

Originally named Gladiator A.D. with a focus on battling gladiators, the developers at High Voltage Software have since made many changes to what is now known as Tournament of Legends. In this fighting game, mythic beings vie for a chance to come face to face with Thanatos, who will step down from his seat of power if he loses in battle to one such being. The characters come equipped with weapons and magic power, though it's possible to grab a rivals weapon and use it against them. While players are fighting each other they should also be wary of guardian creatures who storm into the match if the battle takes place on the creature's home territory. On occasion there will be various minigames that might restore health and quick time events that can complete a special move or can keep a character out of harm's way. This game supports the Wii Remote and Nunchuk combo as well as the classic controller.

A major portion of this feature was an interview with chief creative officer Eric Nofsinger and designer Pat Dolan, both of High Voltage Software. The staff members spoke about the game's concept and it's move from gladiator-style combat to a more mythological setting. They also spoke on the game's technology, character development and control scheme. When asked what advantage the Wii had over other consoles in terms of fighting games, Nofsinger noted the console's game controllers. "Players can get a real sense of two-handed weapon combat," said Nofsinger. "Swinging the Wii Remote sttacks with the right-handed weapon, and swinging the Nunchuk attacks with the left weapon—simple." For those using the classic contoller, Dolan said that certain events "...are executed with the control sticks using directional movements as close to the Wii Remote and Nunchuk controls as possible. We think this should satisfy the Classic-controller fans who want button control, while still preserving the feel that we were going for."

The following games are the winners of the 2009 Nintendo Power Awards. The winners chosen by the editors' and the readers' were listed separately; with the two listings revealing the distinction between the two voting groups. The winners among the staff were varied and was indicative to the editors' broad knowledge of last year's games. New Super Mario Bros. Wii was the overall game of the year according to the editors. The readers, meanwhile, seemed to have voted based on significant characteristics from their favorite games. Kingdom Hearts 358/2 Days received the most awards from readers and was voted the overall game of the year.

"The Best of the Decade"

In this article, the editors of Nintendo Power listed their favorite games and moments of the decade including the top 10 titles from the years 2000 to 2009. The top ten games according to them were:

The editors also gave out various other awards including:

Six Wii games and three DS games were reviewed. The feature review was Sonic & Sega All-Stars Racing for the Wii and Nintendo DS (The console version scored an 8.0 and the handheld version got a 6.0). The highest rated game was No More Heroes 2: Desperate Struggle at 9.0. 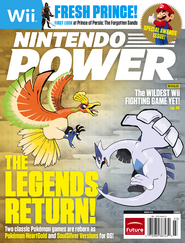 "Best of the Decade" snippet
Add a photo to this gallery

Staff (Staff of the Year)

Retrieved from "https://nintendo.fandom.com/wiki/Nintendo_Power_V252?oldid=557490"
Community content is available under CC-BY-SA unless otherwise noted.