The system includes one NES Classic Controller, a HDMI cable and an AC adapter. The controller ports are identical to ones in the Wii Remote so the various iterations of the Classic Controller are supported. Each game supports save states. The NES Classic Edition also supports various visual options including a pixel perfect option that displays each pixel as a square, a CRT mode and a 4:3 option

Here's the list of games for the same region:

These are the games are only in North American and PAL:

The Famicom Mini for Japan had a few different games like these:

In June 2018, there was a special edition of the Famicom Classic Mini where all the games were replaced by games related to Shonen Jump. 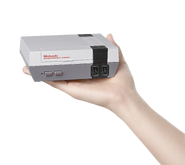