Nintendo
Register
Don't have an account?
Sign In
Advertisement
in: Featured articles, Class A articles, Nintendo,
and 7 more

View source
watch 02:40
World of Warcraft: Dragonflight - The Loop
Do you like this video?
Play Sound

The Nintendo DSi (shortened to DSi or NDSi) is a Nintendo-manufactured handheld console that was first announced on October 2, 2008 and released in Japan on November 1 of the same year and worldwide in early 2009. It is the third model in the Nintendo DS family. The majority of the store bought games for it were initially released exclusively for the Nintendo DS and DS Lite. Nevertheless, it includes a plethora of exclusive features and has an exclusive library of downloadable and retail games. The features are listed below. It is the first handheld system to not have backwards compatibility with Game Boy Advance games, which caused a lot of disappointment when it first came out. However, this also means that the Nintendo DS Rumble Pak, which was used with games such as Mario & Luigi: Partners in Time, cannot be used. Two cameras, music playback functions, Wi-Fi, internet browser, larger screens, and a Wii-like channel interface were added. There was also an app called Flipnote Studio which allowed players to create their own animated flipbooks. The Nintendo DSi has sold 17.82 million units, while the DSi XL sold 2.08 million units as of March 2010.[6] The DSi is also able to download games from the Nintendo DSi Shop (DSiWare), stored on an SD Card or in internal memory. The DSi's front has a camera lens, and another, smaller lens is located where the mic was positioned on the Lite, allowing for photos to be taken with the DSi open.[7]

In China, all the Nintendo DSi consoles (branded as iQue DSi) came bundled with a digital copy of Nintendogs. The two candidates to bundled digitally with the iQue DSi were Nintendogs and New Super Mario Bros. iQue picked the former because Nintendo least wanted to see it pirated and it would better attract casual audiences.[8]. The latter was released physically for the iQue DS in July 2009, 5 months before the release of the iQue DSi.

The Nintendo DSi XL (originally called Nintendo DSi LL in Japan) is a revision model of the DSi. It includes larger screens with a diagonal of 107 mm (4.2 inches) (93% bigger than the DS Lite and the regular DSi's screen). The size and weight are increased accordingly so that the new model weighs 50% more than the DSi. According to reports, Nintendo wants to aim the new version to older gamers who might have trouble seeing the screen of a regular DS model.[9]

In the middle of the Nintendo DSi is the inner camera, and next to that is the mic, which is used in a variety of ways to record vocal data or blow into the microphone for various video games that use this feature. On the lower half of the system are the control components including the D-pad, the A (right), B (bottom), Y (left), and X (top) buttons, and the start and select buttons. The power button, which is placed below the D-pad, turns the system on and off. Quickly pressing the power button will reset the console though won't turn it off, while holding it will turn the system off. On the side of the Nintendo DSi is the SD Card Slot, which can be opened by gently exerting force on it. Putting too much force on it can damage it to the point where it cannot be inserted into the slot properly.

Take note that this is under normal conditions. After charging the battery 500 times, it is expected that the battery life will decrease by 30% to when it was purchased brand new. When playing wirelessly or connected to the internet, or when using the cameras, this also will decrease the amount of time until a battery runs out of power. Certain events in games may consume more power than other events as well, especially saving a game.

Next to the SD Card slot is the Nintendo DSi stylus holder. Only styluses that are made specifically for the Nintendo DSi should be placed in the holder, as the previous Nintendo DS systems' styluses are different sizes. In the middle of the Nintendo DSi where the two halves are connected are the L and R buttons at the ends (indicating Left and Right, respectively). Together, they're known as the shoulder buttons, and are used primarily in games and applications, though can be used in conjunction with the power button to head directly to the touch screen calibration in system settings if the touch screen isn't acting properly. Directly in the middle is the DS Game Card Slot, which holds Nintendo DS and Nintendo DSi game cards. Next to the slot are the wrist strap attachment and the AC Adapter Connector.

The top screen features the photo display, which takes one of the existing photos in the user's gallery and places it on the top screen. Using the Nintendo DSi Camera application, you can choose which photos will be showcased on the upper screen. If more than one image is chosen, then the image will change after closing and opening the Nintendo DSi. Also featured on the top screen is the volume level, the user's name, the date, the time of the day, and the battery level.

The Nintendo DSi Sound allows the user to record sounds. The player is also allowed to play with their own music if it's on an SD Card. It can be accessed by pressing the parakeet icon on the Nintendo DSi Menu. After recording a sound, the player can keep it by pressing one of the colors that are displayed (the colors are meant to differentiate the sounds). Following this, the player can alter the speed and sound of it, adding filters to make it sound funny.

DS Download Play allows players to play multiplayer enabled games wirelessly. Some games require that the all players involved have a card, while others don't. Some games will allow everyone to play with just one card though also remove certain features to those without the card (example: in Mario Kart DS, those that don't have a card are required to play as Shy Guy).

In System Settings, the user is able to alter various aspects of the Nintendo DSi. There are four pages in System Settings. The player can navigate the pages by pressing the arrow on the screen (the color of the arrows changes depending on the color the player chooses in "profile"). On the top screen is the player's ID, which contains their name, their chosen color, and their birthday. Also on the top screen is the version of the Nintendo DSi. The available options in System Settings are:

Days before the handheld was announced, a news report was released in Japan revealing the console, much to Nintendo's dismay. They proceeded on, however, neither confirming or denying the claims, which stated some of the primary features of the system. On October 2, 2008, Nintendo announced during a Japanese press conference the DSi, and reported all the news revealed on their official website, which Nintendo themselves later translated into English. It was released in Japan on November 1, 2008 The next day in America, the DSi wasn't a major topic since it was confirmed that it wouldn't be released until well into 2009. However, Nintendo of America announced that the DSi would be released in North America on April 5, 2009. Australia would get the DSi available on April 2, 2009, in Europe on April 3, 2009, and in South Korea on April 15, 2010. The "i" in the name represents the two cameras and the console's individuality. Nintendo explains that the cameras give the DS a third human sense; whereas the original DS gave it touch (touch screen) and hearing (mic), the camera gives it sight.

Nintendo started planning a new DS (which was a long time before they thought of the DSi) in 2006 shortly after the release of the DS Lite (the first Nintendo DS redesign). The designers at the Developing Engineering Department had to create a proposal for their boss and the rest of Nintendo by the end of December of that year, a hefty task to take on at such a short notice. One of the major problems while developing the new piece of hardware was the fact the fact that it really wasn't a new piece of hardware, and that selling it would be a challenge since a host of new games wouldn't be released alongside it. Nevertheless, they pushed on, fortunately with the knowledge that they had already done a similar feat with the DS Lite. Another dilemma was figuring out how to be innovative while still being restrained by the features of the previous Nintendo DS models.

The first new feature that they decided on was the cameras. They speculated whether they should have two cameras, one on the inside looking at you and one on the outside or a swivel that had a camera on it that could turn so you could change the position of it. Ultimately they decided to choose two cameras since the swivel would increase the cost of the handheld. It was also found that swivels break easily, according to Nintendo president Satoru Iwata.

The next thing that they had to come up with was the pixel count of the two cameras. Ultimately, they have decided to settle on 0.3-megapixel cameras. While considerably less than high profile cameras, Nintendo explained this peculiar route. One of the problems was that a higher pixel count would require a larger DSi, and Nintendo was dead set on creating an accessible system that wasn't clunky. It would also increase the processing load and the amount of memory in order to save an image, and with the DSi's very limited space this is something that was not needed.

In October of 2007, the development team modeled a version of their new DS and showed it to ten people working within Nintendo's EAD divisions and asked them if the new console was one that they would want to own. Unfortunately for the designers, only three said it looked like a system they wanted to own and seven said that it wasn't. One of the system's designers said that the three who said they didn't were probably lying themselves since the people who made it were standing right there (and thus they didn't want to offend them). So, reluctantly though inevitably, they had to go back to the drawing board, and had to remove some features from the clunky design they had showcased. One of those things were two separate DS game card slots. In one of the initial designs, Nintendo had planned to have two DS slots so that the player could store two games without having to switch them around. However, despite requests by gamers and workers in house, the unit was just too big and they had to be removed. Apparently, the extra slot made the unit three millimeters thicker as well and it still wasn't the DSi.

In the Nintendo DSi Sound application, you have to make a recording and then go to the menu of recording and wait for a minute. After a minute or so is up, you will hear the sound you just recorded in the tune of the Super Mario Bros. theme.

The DSi closed. The main camera can be seen here.

The DSi on its side. 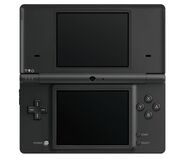 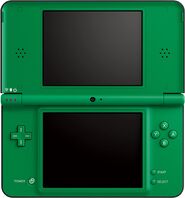 Menu on the DSi XL. 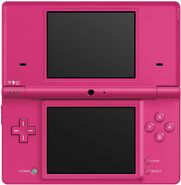