Nintendo
Register
Don't have an account?
Sign In
Advertisement
in: Class A articles, Nintendo, Consoles,
and 5 more
English 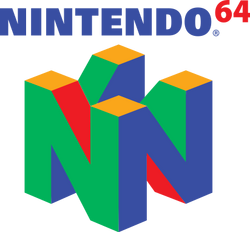 ) (N64), stylized as NINTENDO⁶⁴, is a home video game console developed and marketed by Nintendo. Named for its 64-bit processing unit, it was first released in Japan and North America in 1996, followed by Australia, Europe, and other parts of the world in 1997. In South Korea, the console was called Comboy 64 and was distributed by Hyundai instead of Nintendo.

The N64 was Nintendo's third major home video game console, and was originally codenamed "Project: Reality" while it was being worked on by Nintendo and Silicon Graphics (SGI) in April 1993 to create a next-generation 3D console. As part of the fifth generation of video game consoles, the N64 leaped from 16-bit sprite-based graphics into a polygon world thanks to its powerful 64-bit CPU and GPU. The SNES was a 16-bit console, and the next console to be released was the Nintendo 64, completely skipping the 32-bit era. The Nintendo 64 would be Nintendo's last home console to use cartridges until the Nintendo Switch in 2017, though Nintendo's handhelds would continue to support the format.

The decision to choose cartridges over CD's did make quite a few third-party developers to turn away from the system all together. Not only were cartridges more expensive and had less capacity than CDs, but it also meant that Nintendo would be the only supplier, enforcing their grip on licenses. Nintendo's defense was to say that cartridges were still the media of choice for home consoles because they did not suffer from slow loading times and were somewhat more practical than CD's.

At the time, the Nintendo 64 was the only true 64-bit system and the first with built-in four-player gaming. Games such as Super Mario 64, The Legend of Zelda: Ocarina of Time, Mario Kart 64, Star Fox 64, F-Zero X, Super Smash Bros., and GoldenEye 007 helped sell over 32 million N64 systems worldwide, though it wasn't enough to surpass the PlayStation 1. Nevertheless, it did make its mark on history with its innovative controller and true 3D capabilities. Production for the N64 ended in Japan in early 2002 and worldwide in late 2003.

In 1993, development on the Nintendo 64 was started as "Project: Reality" as a successor to the SNES. This venture, with the help of Silicon Graphics, was intended to create a graphics processor that would send video games into the 3D realm, confident that it would appeal to fans of CGI, especially since CGI-heavy movies like The Abyss, Jurassic Park, and Terminator 2: Judgment Day were becoming increasingly popular partly because of this new technology.

Unlike competing consoles, Nintendo rejected the use of optical discs for their newest console and stuck to the "tried-and-true" cartridge route, disappointing both fans and developers due to cartridges at the time having significantly less storage space and greater manufacturing costs.

This, combined with Nintendo's draconian reputation for censorship, prompted many third-party developers to abandon Nintendo in favor of Sony when the latter company released the disc-based PlayStation (which ironically started out as an add-on for the SNES before talks fell through due to its proposed contract giving Sony full rights to the games that would be released for it).

It is not entirely known why Nintendo chose to stick with cartridges for the N64, though official statements from Nintendo of America cited cartridges having significantly shorter load times than optical discs; many people have also inferred that the use of cartridges was for greater protection against piracy, as their last experiment with a disk-based console was infamous for its rampant piracy problems during its lifespan.

The next year Nintendo changed their latest console's name to the Ultra 64, though because Konami, another game developer, had already copyrighted the name for various NES titles (as Nintendo had a limit on how many games a company could publish for the NES each year), Nintendo had to drop the title and thus changed it to the Nintendo 64. Nintendo had hoped to release the console in 1995, though had to delay it, causing it to be released long after the Sega Saturn and Sony PlayStation had been released. It wasn't even playable until late 1995 in Japan and a few months later in America at E3.

When a small stream of video games were announced for the console compared to that of the PlayStation's, Nintendo delivered the ever popular "quality vs. quantity" statement. Arguably this was true - many of their games have been highly praised, with even The Legend of Zelda: Ocarina of Time to this day being the highest rated video game of all time on GameRankings, and Super Mario 64 close behind it.

However, the low output of new titles and the expensive prices of N64 games compared to PlayStation ones (due to the latter's use of cheaper and larger-capacity optical discs) ultimately led to Nintendo losing their lead in the console market in favor of Sony, prompting Nintendo to switch to optical discs for their next console.

The aforementioned Super Mario 64 complimented the launch of the console along with other titles that were dwarfed by the shear scale of the newest Mario platform video game that set the standard for all the future 3D platformers and, in a sense, the entire action adventure genre as well with its fantastic camera. The Nintendo 64 along with Mario, Pilotwings 64, and the negligible Saikyo Habu Shogi were all present during the Japanese launch of the game, which proved successful enough.

It was even more successful in America with an appealing $199 price tag as well as plenty of other games that would be released throughout the year that sported popular brand names including Star Wars, Mortal Kombat, Turok, Killer Instinct, and Wave Race.

Because of the aforementioned titles, primarily Super Mario 64, it sold out entirely in America. The consoles were sold approximately three days earlier than scheduled.

The N64 lasted successful for seven years on the market. The last game to be released on the system was Tony Hawk's Pro Skater 3 on August 20th, 2002. Production for the system ended on November 30th, 2003 and the last systems were shipped in early 2004. Software sales have ended later the same year.

The Nintendo 64 Disk Drive (also called Nintendo 64DD or N64 DD) is a disk drive for the Nintendo 64. The Disk Drive plugs into the N64's expansion port on the base of the system. It was much hyped around the time of the N64's launch, but it was never released outside of Japan because it was a commercial failure.

The following are the technical specifications for the Nintendo 64.

The Nintendo 64 hardware has four controller ports, which led Nintendo to develop different colored controllers to assist players who may find it difficulty to know which controller is in which slot. Nintendo did not release different colored controller in the previous generation. The initial batch of colors were completely solid and included the standard grey, red, dark green, yellow, black and dark blue. As time went on, Nintendo started to release other colors, some of which featured two different colors such as the black and grey one that was released alongside Mario Kart 64 (the top half was black while the bottom half was grey).

Nintendo of America eventually released a set of transparent Nintendo 64's with different colors. The colors were given unique names including grape, watermelon, fire, smoke, jungle green, and ice. Additionally, Nintendo released a special gold Nintendo 64 for the launch of The Legend of Zelda: Ocarina of Time.