The system launched on October 19, 2013 in China, on December 7, 2013, in South Korea, coming with digital versions of Pokemon X and Y. It was released in Japan on February 27, 2016. It is a redesign of the Nintendo 3DS. A larger version titled the New Nintendo 2DS XL (New Nintendo 2DS LL) was released in mid-2017. The model was discontinued in North America on February 8, 2020, (but is still available in other countries) leaving the New 2DS XL the only model in the family as well as the only Nintendo handheld to still be in production worldwide.

So it can't fold up like a Nintendo DS/3DS, and as such, it cannot be paused by folding it up. Instead, it has a Sleep switch in the bottom right-hand corner. It has one mono speaker on the top left, which is a first for the Nintendo DS/3DS line of systems. It has a single touch screen, but the casing creates the illusion of two screens, and plastic covers the top screen area to prevent it from being touched.

The Nintendo 2DS cannot display games in 3D, hence the name 2DS. The removal of 3D capabilities was done to help sell it to younger audiences, as the 3D capabilities of the 3DS are not recommended to be used by children under the age of seven. However, it features two cameras and allows people to take 3D pictures and videos. However, it cannot play or show them in 3D, while those pictures when sent to a 3DS can be shown in 3D.

It has a slanted design on it's back and two shoulder buttons that curve from the top to partly down the side. The 2DS has very similar buttons to the 3DS, but different button placement because of it's different design. The A, B, Y and X buttons are placed to the right of the upper screen, with the classic D-pad and circle pad to the left. It has a power button the bottom-right and a mic on the other side of the bottom screen. The home button is placed below the touchscreen with the + and - buttons to the right of it. 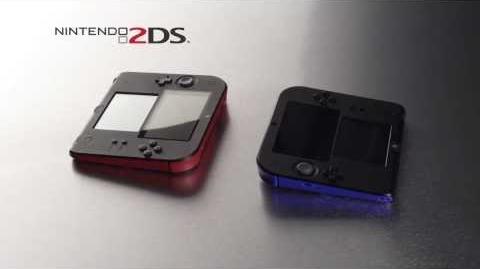 Retrieved from "https://nintendo.fandom.com/wiki/Nintendo_2DS?oldid=557902"
Community content is available under CC-BY-SA unless otherwise noted.