The Nintendo conference is over and day 1 or 2 (depending on how you prefer to look at it) has ended. Miyamoto had a roundtable that revealed one interesting picture that wasn't revealed to the public and countless games were announced during Nintendo's presser that'll surely whet your gaming appetite. E3's not over yet, but it's off to a fantastic start that will probably rival the best of what the conference has offered in the past. Here's a recap for all of you who weren't here yesterday to read it as it happened.

During the conference, Nintendo started off with a bang when Cammie came out and didn't discuss Mother's Day cards or skiing accidents. Instead, she had the pleasure of revealing to the public New Super Mario Bros. Wii, the successor to New Super Mario Bros. that'll have a four player cooperative mode (note: not online). The playable characters include Mario, Luigi, a blue Toad and a yellow Toad. Yoshi will act as a sidekick when you find him in eggs that are scattered throughout the stages and there are plenty of new costumes such as the propeller and a penguin suit.

After the conference we were shown some new footage of the Wii MotionPlus title Wii Sports Resort, and naturally new events were shown including basketball, skydiving, canoeing, archery, and samurai swords. Next after that Nintendo announced a sequel to Wii Fit titled Wii Fit Plus. The game will have fifteen new minigames and six new activities. Nintendo's Wii Vitality Sensor is a a confusing one to say the least. How exactly this will be put to use is unknown, and to be frank I'm interested but not too excited.

On the RPG front Nintendo announced Golden Sun DS for the Nintendo DS, the successor to The Lost Age on GBA which came out six years ago. Kingdom Hearts: 358/2 was dated as well for September 29th of this year. Mario & Luigi 3 got a name change for America and is now known as Mario & Luigi: Bowser's Inside Story. The game will be released this Fall. Various other DS games were also shown off including WarioWare D.I.Y. (Do it Yourself), which is Made in Ore. Mario vs. Donkey Kong: Minis March Again was announced for DSiWare and will be released next week. An update to DSi will be made soon that'll let you upload your images to facebook. Style Savvy, the hit game in Japan (known as Girl Mode) was also announced for America. Ubisoft announced C.O.P., a GTA-esque game for the DS. The Moving Memo was renamed for America and is now known as Flipnote Studio and will be released this summer. Finally, a game titled Women's Murder Club was announced for the DS.

What I am excited about, however, is the announcement of yet another Wii Mario platformer titled Super Mario Galaxy 2, the first sequel to a 3D Mario game and the first time a second 3D Mario game has been released on the same console. The game will feature similar gameplay but new features such as the addition of Yoshi. At the end of the conference Nintendo announced Metroid: Other M, an exciting new game from the developer Team Ninja, the peeps behind the critically acclaimed Ninja Gaiden series. The game will seem to focus on Samus' backstory, but also seems to have some footage after Fusion (note: this is all speculation of course). The graphics are gorgeous and there's even GC footage too.

The above isn't the only stuff that was announced on day one, however, as after the show Nintendo announced a plethora of other titles that they're publishing for America including Fossil Fighters, Professor Layton and the Diabolical Box, Style Savvy, Glory of Heracles, and Picross DS on the DS, Monado: Beginning of the World, Span Smasher, and Line Attack Heroes for the Wii, You, Me & the Cubes and PictureBook Games: Pop-Up Pursuit for WiiWare, and Flipnote Studio, Crash-Course Domo, Hard-Hat Domo, Mario Calculator, Mario Clock, Pro-Putt Domo, Rock-n-Roll Domo, Six in One Translator, and White-Water Domo for DSiWare.

Atlus confirmed on day one that they were going to be publishing Shiren the Warrior on Wii in America. An illustration from The Legend of Zelda for Wii was shown during a Miyamoto roundtable, but unfortunately the image wasn't released to the public. It showcased an adult Link who is much older than any previous incarnation of the character. Miyamoto also said that the developers are thinking of implementing Wii MotionPlus. Miyamoto also announced that the new Spirit Tracks will have a four player multiplayer mode. At E3 it was shown that the Koopalings will make a return in New Super Mario Bros. Wii.

Or you could call it the Mario card. Whichever you prefer. 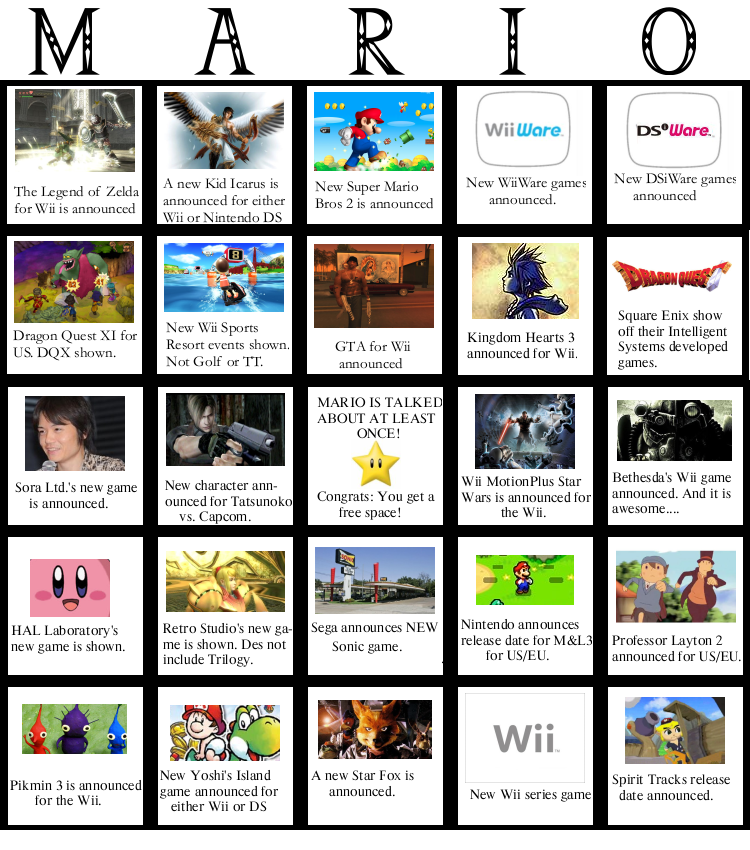 For news regarding E3, see our news page!

While we all hope that Kid Icarus, Zelda Wii and Pikmin 3 will be present at the show, we can't confirm it. Below are the official games that publishers have confirmed to be present. Note that only games being released on a Nintendo console are shown. Also, the list may only be short right now, but remember that the events still a month away. I'm actually astonished that we know this much already! In the coming weeks of the event, expect the big publishers to announce which games will be present accompanied by "and a few surprises too!" message.

Retrieved from "https://nintendo.fandom.com/wiki/Nintendo:E3_2009_center?oldid=98673"
Community content is available under CC-BY-SA unless otherwise noted.