Ninjis are black and star-shaped devil-like creatures that first appeared as enemies in Yume Kōjō: Doki Doki Panic, whose manual states they are said to haunt the dreams of NES players.[1][2] Their appearance in the international release, Super Mario Bros. 2, marked their main series debut.

Ninjis were originally portrayed with red teeth and clawed feet in artwork, but later appearances remove their claws and replace their teeth with round buttons. Their large eyes are also made rectangular, closer resembling eyeholes in a stereotypical ninja costume. Current depictions, such as their Mario & Luigi: Paper Jam appearance, show their "pupils" blinking, implying they are now the true eyes, and the sclerae are white skin under a black costume, though this may also be a cartoon effect.

Ninjis first appear in Yume Kōjō: Doki Doki Panic and Super Mario Bros. 2. In this game, Ninjis serve Wart, a mischievous monster who had seized control of the dream world known as Subcon. There are two types of Ninji: the first type charges at Mario, suddenly jumping as it approached; the second type remains in one place and jumps up and down.[3][4] Ninjis are depicted as purple instead of black in Super Mario All-Stars, BS Super Mario USA and Super Mario Advance. Giant Ninjis also appear as somewhat rare enemies in Super Mario Advance. These giant Ninjis only jump in place. Like most enemies in Super Mario Bros. 2 and its remakes, all variations of Ninjis can be picked up and thrown at other enemies to defeat them. Giant Ninjis yield a heart if they are thrown to the ground or defeated.

Ninjis also appear in Super Mario World, where they are known as Mini-Ninjas and are said to have been driven mad by their isolation in Bowser's Castle.[5] They only appear in the Front Door and Back Door courses, where they blend in the darkness and are difficult to see unless the searchlight is activated, which may be why they used said tricolor sprites. They jump in place and can be defeated with stomps, fireballs, or a cape attack. They are one of the few enemies not seen in the credits.

Despite using their previous 8-bit sprites, the artwork for this game reinterprets their red spots as buttons, while previously they had been depicted as parts of the creature's mouth. This interpretation is used for all further depictions, including reissues of Super Mario Bros. 2, despite not looking like the sprites in that game.

Despite appearing prominently in its opening sequence, Ninjis only appear once in The Super Mario Bros. Super Show!, in the episode Karate Koopa, where they aid Karate Koopa in his plan to capture Princess Toadstool and sell her into slavery for a fortune. Somewhat parodying their namesake, they are skilled in hand-to-hand combat and speak in thick Japanese accents.

In the Super Mario World animated series, Ninjis (here referred to as "Mini-Ninjas") appear only in the episode The Yoshi Shuffle as spectators to Yoshi and Mario's football game against Bully, Big Mouth and Cheatsy and several Koopa Football Players in the Neon Castle. Here, they are brown in color, have red teeth, distinct fingered hands, and stubby feet without claws.

Ninjis make a few appearances throughout Super Mario-Kun. Not only are they in arcs dealing with Super Mario Bros. 2, they have appeared in the first few volumes, which deal mostly with Super Mario World. Their depiction in this appearance is used in some later artwork.

In Nintendo Comics System, Ninjis only make minor appearances, with one appearing in the background of the story The Legend, while several, having been beaten senseless by a sleepwalking Mario who believes himself to be Dirk Drain-Head, appear in Bedtime for Drain-Head.

In Unjust Desserts, some Ninji are shrunk by Magikoopa and eaten by Yoshi, though Mario never encounters any in the dinosaur's body, only in the palace garden. In Brain Drain, if Luigi (who has had his mind switched with a Koopa Troopa's due to the Synapse Switcher) gets a serving of gooey rations in the cafeteria of Iggy Koopa's base, a Ninji he sits beside tells him that the gray gunk is better than the blue. Some Ninjis are also spotted loitering around the WMUSH radio station when Iggy takes it over.

Super Mario Bros. & Friends: When I Grow Up

A Ninji makes a small cameo in the coloring book game Super Mario Bros. & Friends: When I Grow Up, on the Veterinarian page.

The Ninjis in Hotel Mario are called Mini Ninjas[6] but are otherwise no different from any other variety.

In Mario vs. Donkey Kong, a toy version of the Ninji appears, based on the second type in its debut appearance.

In Mario Party Advance, an individual Ninji lives on the first floor of Horror Condo.

In Paper Mario, several Ninjis live in Starborn Valley and act as the caretakers of the Star Kids. After Chapter 6, Mario meets a Ninji at Merlon's house who tells him to go to Starborn Valley.

After a long absence, Ninjis appear again in Paper Mario: Sticker Star. They only appear in World 3, and are the weakest enemy that can be encountered in the forest, being only slightly stronger than Goombas. Despite this, Ninjis are still aggressive and chase Mario if they should see him. In the overworld, Ninjis tend to hide in the poisoned waters or trees of the forest levels, much like the Bzzaps! in Paper Mario.

In battle, a Ninji can either turn itself into a throwing star and hurl itself at Mario, or it can just run up to Mario and slam him. Mario must watch the positions of Ninjis, as they are one of the few enemies that can dodge Mario's attacks (the others being Paragoombas, Shiny Paragoombas and the Wiggler Segments). If they are jumping, they cannot be hammered, and if they are standing still, they cannot be jumped on. If Ninjis are hit with the 'wrong' attacks, they disappear in a cloud of smoke and leave a log (also known as a decoy) behind, causing the attack to miss; they then run back into battle while falling from the top screen. This may cause Mario to fall on his face. Ninjis can be hit with the Hurlhammer sticker even when they're jumping, but this means that the player has to have good timing for the hit to land. They can also dodge Shell sticker attacks if they are jumping. If Ninjis are sleeping, crumpled, stopped, or dizzy, they are not able to dodge Mario's jump attacks. Sometimes after battle, a Ninji may occasionally drop a Throwing Star sticker when defeated.

Ninjis return in Paper Mario: Color Splash keeping their appearance from the previous game. Unlike in Paper Mario: Sticker Star, Ninjis cannot dodge jump attacks, though they still dodge hammer attacks. When approached by Mario outside of battle, they disappear briefly, and then reappear in front of him.

Ninji are primarily found in Fort Cobalt, where they are found in a corridor filled with crates that is entered if Mario fails the last fence puzzle. One Ninji can be found sleeping, and wakes up if Mario hits his hammer nearby. Ninjis make a brief appearance among the minions causing havoc at the Toad Trainworks when the Sunset Express needs repairs. The Ninjis fought in Toad Trainworks are unavoidable.

Ninjis make their first Mario & Luigi appearance in Mario & Luigi: Paper Jam as enemies in Gloomy Woods, and one pair is fought in Neo Bowser Castle as one of Bowser's last lines of defense. The game features both normal and paper variants of the Ninji enemy. They now act more like how actual ninjas would, even using camouflage sheets to hide themselves in the overworld. In battle, regular Ninjis use ninjitsu-styled attacks, such as creating shadow clones of themselves to attack the trio. The fake Ninjis can be told apart from the real one by their blue-colored buttons, as opposed to the genuine one's red buttons. Jump or Hammer attacks also cannot be used consecutively against them, as they avoid taking damage via substitution with a log. If there is a Paper Ninji present, a regular Ninji can fold it into a shuriken and throw it at a bro, who must hammer it back.

Ninjis reappear in Mario & Luigi: Bowser's Inside Story + Bowser Jr.'s Journey, as allies and enemies in the Bowser Jr.'s Journey mode. They are ranged troopers, their Special Skill is Hurt or Heal, and they are strong against Tail Boos and Big Tail Goombas. 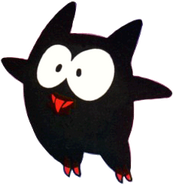 Ninji
Add a photo to this gallery

Paper Mario.
Add a photo to this gallery

Retrieved from "https://nintendo.fandom.com/wiki/Ninji?oldid=524036"
Community content is available under CC-BY-SA unless otherwise noted.