Nikki is the mascot Mii in Swapnote who gives you tips and rewards every now and then. When you download the Swapnote application from Nintendo eShop, Nikki is added to your Mii collection in StreetPass Mii Plaza.

Her first and Major appearance is in the 3DS application, Swapnote. Here she would instruct players how to use the feature, and after that players can chose weather or not to receive notes from her in the future. If players selected Yes, Nikki would continue to send notes to the player giving them updates on upcoming Nintendo news, as well as simply sending notes wishing them a good day, or sending words of encouragement.

After Swapnote had its online feature removed, Nikki sent a farewell note saying she was going away for a while. She wished the player luck, and then would leave.

Art Academy: Lessons for Everyone!

Nikki later made another appearance in Art Academy: Lessons for Everyone!, delivering a free SpotPass lesson from Nintendo. In this lesson, she teaches the player how to draw a Goomba with pastels.

She now appears in the Nintendo News section of Nintendo's website. She is also shown having gained two new assistants; a yellow cat and a panda.

Nikki is also the star of her own video game called Nikki’s Travel Quizz. Originally given out to Club Nintendo members who have had enough points to purchase it from the official site, it is a quiz game that features Nikki, her panda, and her cat.

Players travel to different parts of Japan, and Nikki will quiz players on certain locations, buildings, and peoples from said location. Nikki's Panda is capable of giving players hints if they are struggling to answer certain questions. Nikki will often times dress up in different outfits, such as a sailors uniform, or a kimono, when talking about a particular subject or while visiting a specific region in japan.

With Club Nintendo having been taken down, it is unknown how the game will be distributed now.

Nikki also appears as an unlockable costume for Mario in Super Mario Maker, based on her redesign from Nintendo News and Nikki's Travel Quizz.

Nikki makes a pseudo-apeparance in Way-Forwards multi-console game Shantae: Half-Genie Hero. As part of being a backer for the Kickstarter of Half-Genie Hero, those who donate enough money are allowed to design an enemy type that will appear in the game.[1]

Designed by Backer Roger C, Ikki is a direct reference to Nintendo's Nikki. Ikki is a spirit who is seen wearing a green sweater, based on Nikki's Mii as she appeared in Swap Note. She sports Nikki's hair style, upper body proportions, and even her signature glasses.

As an enemy Ikki hides in treasure chests and may randomly appear when opened. From there Ikki will phases in and out, turning invisible and then re-appearing in a random place in the environment, and toss projectile weapons at players. This is the time to strike and make Ikki vanish, until she randomly appears when another chest is opened.

Nikki stands out for having fair skin. She has a brownish-gold cut-bob with her bangs styled to the left and has brown eyes worn in red reading glasses. She is often seen wearing light green, and is short in height.

As of her re-design, Nikki is shown getting a white button-up undershirt, with a light green jacket. She now wears a black knee length skirt, with black stockings and shoes. She still sports her signature red glasses.

Nikki could be a Japanese-American, as her name, while definitely Japanese, also fits as American; her name in Japanese means "diary" (日記, にっき, Nikki) and in America, her name could be short for Nicole. The name Nicole is of french origin, and it means "Victory Of The People"[2]. Its shortened variation as Nikki was created in America[3]. Nikki's name is official written as ニッキー in Japanese.

She seems to be even-tempered, always bouncy and cheerful, calm and always determined. She tries makes you feel like there is always someone there for you. She sends you letters regularly which contain important information and updates. She likes to spend a lot of her time reading, writing and spelling at school, but isn't very good at something that she hasn't done before.

Nikki upon Miiverse has gained popularity by Nintendo users, she's considered the most loved Mii in the entire Nintendo Miiverse, and have gained lots of fan arts from his fans, also by that she won her own game that released only inside of Mapan, called "Nikki Travel Quiz", It's simply an game about quiz, Nikki travel along with her cat and panda sidekicks making quizzes.

She also got multiple times recorded into YouTube videos, snapshooted or created as a Mii fighter in SSB4.

A QR Code of Nikki's official Mii that was once available when Swap Note could be used online. Below is Nikki as a Mii Gunner in SSB4-3DS.

Nikki as a Mii Gunner in SSB4

Nikki, alongside Takamaru, in Super Smash Bros. for Nintendo 3DS. 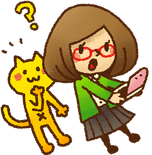 Nikki being surprised by something on her 3DS.

Nikki, alongside two of her animal companions, with Cat Mario and Cat Peach while celebrating with amiibo figurines.

Ikki Bio for Half-Genie Hero.
Add a photo to this gallery