) (called New Nintendo 2DS LL in Japan and shortened to New 2DS XL and New 2DS LL in Japan) is the sixth and latest revision of the Nintendo 3DS line incorporating the features of the New Nintendo 3DS with a sleeker design and the removal of the 3D capability. Announced on April 27, 2017, it was first released in Australia on June 15, 2017, in Japan and South Korea on July 13, 2017, and later on in July 28, 2017 in North America and Europe. It is a larger version of the original Nintendo 2DS, which was discontinued in North America on February 8, 2020, leaving the New 2DS XL the only model in the 3DS family as well as the only handheld model to still be in production worldwide.

The new model features the same sized screen as the New Nintendo 3DS XL, but trims the outer edges making the device shorter with width and thickness maintained.

The screen is also lacking 3D capabilities. The New Nintendo 2DS XL is as light as the original Nintendo 2DS at 9.2 ounces. The inner camera is now in the hinge and there's a C-Stick on the right side

The internal processors and such are the same as the New Nintendo 3DS, thus being compatible with the exclusive games such as Xenoblade Chronicles 3D and the SNES Virtual Console as well overall faster loading. 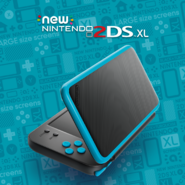 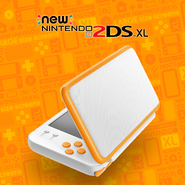 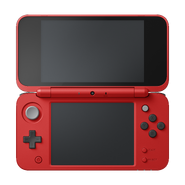 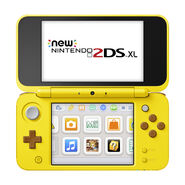