The NHL Slapshot hockey stick peripheral is an accessory for the Wii that is used with EA Sports' NHL Slapshot.

The Wii accessory was released with the NHL Slapshot bundle, but can also be purchased separately.

The Wii Remote snaps into the shaft of the stick and the Nunchuk snaps into the butt-end of the stick. The stick can then be held as if it were a real hockey stick, allowing the player to make much more realistic movements when passing and shooting in the game. 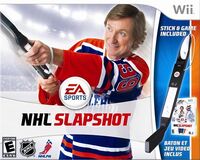 Retrieved from "https://nintendo.fandom.com/wiki/NHL_Slapshot_hockey_stick?oldid=506162"
Community content is available under CC-BY-SA unless otherwise noted.