The Moon is (arguably) a character featured in The Legend of Zelda: Majora's Mask. In the game, the Moon was a puppet of Majora's Mask that was intended to crash into Termina.

The Legend of Zelda series

After possessing Skull Kid, the Moon was corrupted by Majora's Mask and ultimately pulled from its orbit around the game's world. As the game progressed, the moon would slowly, but surely close in on Termina's Clock Town. On the third day, it would, though the game's protagonist Link managed to come in possession of an Ocarina that would start the three days over once he played a certain song on it.

While normally the moon has no face, Majora's Mask placed a curse upon it that possibly gave it its terrifying face that symbolized the impending destruction that was soon to ensue. After travelling to four of the game's dungeons, Link managed to break the Four Giants free. The "four who are there" arrived just in time before the moon crashed into the planet and stopped it in its path. Link entered the mouth of the moon, as did Majora's Mask, and the two battled inside of it with Link becoming the inevitable winner.

A sculpture of what appears to be the Moon sits behind the counter of the Nintendo Gallery. Also, the face of the moon is also seen in various spots inside the Tower of the Gods.

In Hyrule Warriors, Midna, Agitha, and Lana summon the Great Fairy's aid in weakening Argorok. When the Great Fairy's effort to subdue it with a magic clawshot chains also fails, she fires another magic clawshot chain into the sky, pulling the Moon towards the flying Argorok which is hit from behind right by the Moon's nose. When the Hookshot is upgraded to the Clawshot, a smaller Moon briefly appears as a finishing blow, an attack which can also destroy boulders and Beamos.

In Hyrule Warriors Legends and Hyrule Warriors: Definitive Edition, the Moon has a very similar role than it did in Hyrule Warriors but it also appears as part of Skull Kid's Ocarina moveset. Skull Kid will summon a smaller Moon which he kicks around like a soccer ball before launching it, creating a huge crater as his Focus Spirit Attack. Also the design of his Lunar Ocarina (Level 2 Weapon) is based on the Moon. There is also a Fairy Clothing option called Moon's Aura which is an aura designed to look like the Moon's artwork from Majora's Mask 3D.

In Super Smash Bros. Melee for the GameCube, the Moon appeared in the background of the Great Bay stage. Here, the moon would start to home in on Termina though, as in the game, the Four Giants would come to the rescue and push it away. The moon itself had absolutely no effect on the fight.

The Moon is now an Assist Trophy that appears in the background before getting progressively closer and crashing on the stage causing huge damage to anyone close enough to the gigantic celestial body. 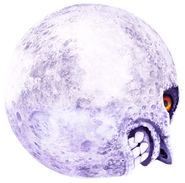 The Legend of Zelda: Majora's Mask 3D.
Add a photo to this gallery
Retrieved from "https://nintendo.fandom.com/wiki/Moon?oldid=524617"
Community content is available under CC-BY-SA unless otherwise noted.