The Mockiwi is an enemy found in Hey! Pikmin that is a member of the Mockiwi Family. It is a round, bird-like creature with a yellow body and a short, wide beak, large eyes, and two small wings that aren't functional.

The Mockiwi are aggressive creatures that will attack any type of Pikmin on sight. They usually patrol on a set path. When they spot Pikmin or Captain Olimar, they will chase them. Mockiwi can emerge from holes in walls. These Mockiwi will only appear after the previous one is killed. Mockiwi cannot swim and will drown in they fall into water. Mockiwi will not follow Olimar if he climb a ledge.

In Super Smash Bros. Ultimate, the Mockiwi appears as a Primary Novice Shield Spirit with two slots open for support spirits and no particular effect when equiped on its own.

"Its large beak is a holdover from when its kind could fly, but the wings are totally vestigial now. It spends all its time either eating or sleeping. Hmm...reminds me of a certain pooch back on Hocotate." 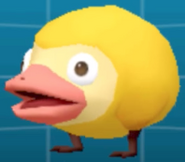 Icon in Hey! Pikmin.
Add a photo to this gallery
Retrieved from "https://nintendo.fandom.com/wiki/Mockiwi?oldid=462116"
Community content is available under CC-BY-SA unless otherwise noted.