Thousands of years ago, Mila was from the Divine Dragon tribe in Archanea. She served Naga, the ruler of the Dragon tribes and strongest of the Divine Dragons, blessing the lands to allow prosperity for the dragons, earning the title of Kingsgrail. Her brother would meanwhile protecting her with his military might, earning the title of Kingshield along with her favor.

Duma eventually clashed against Naga in a ferocious battle, Mila sided with him, though they were no match for Naga and her forces, and surrendered after nine days of battle that caused extensive damage across the land. For their transgressions, the two siblings were exiled to Valentia, which they would claim as their new home. In time, they would be regarded as the patron deities of their land.

Despite settling in Valentia, Duma's lust for battle, along with his beliefs over humanity led him to clash with Mila. While Duma believed that hardship creates hardy, strong humans, Mila believed that humans should live without strife, creating peaceful people. Eventually, they reached an accord: they would divide the land of Valentia into two, where Duma would rule the north which would become later known as Rigel, and Mila the south that would become Zofia, and neither was allowed to intervene with the other and cross into their nations.

At the beginning of the game, Mila has mysteriously vanished, which prompts Celica to leave in search of her. It is later discovered that Mila was sealed within the Falchion by Emperor Rudolf, who she had fought when he and his forces invaded her temple, as a part of his ploy to destroy the gods before their descend into madness could completely corrupt humanity.

It is later revealed by Halcyon, the former high priest of the Duma Faithful, that both Mila's body and the Falchion, which contains her soul, are sealed beneath Duma Tower. Before Jedah, the new high priest of the Duma Faithful, sacrifices Celica's soul to Duma, he reveals to Celica that Mila sealed the Falchion, which had been impaled into her head, preventing anyone from using it. He then destroys Mila's body, with only her head remaining, then teleports both Mila's head and the brainwashed Celica to the treasure vault.

Later on, when Celica is forced by Jedah to fight Alm, Mila calls out to Alm, telling him to grasp the Falchion in his hand and to trust in the sword. After Alm impales and kills Celica with the Falchion, Mila uses the last of her powers to revive Celica. Afterwards, when Alm asks Celica how she is alive, she says that she heard Mila's voice, telling her to have faith in the Falchion.

Mila's soul then proceeds to speak with Alm and Celica, telling them the Falchion had taken away her powers. She reveals that the Falchion was created from one of Naga's fangs and bestowed upon Duma for the sole purpose of allowing mankind to kill her and Duma should either of them succumb to madness and that she had foolishly sealed the Falchion away in order to protect Duma. She then thanks Alm and Celica for showing her the strength that mankind possesses. Before fading away, she asks them to use the Falchion to stop Duma and free him from the depths of his pain.

After Duma's death, the two siblings are buried together under what would become Mila Tree. Nomah would later merge the religions of Duma and Mila and become their religious leader. 2000 years later, Mila's religion is mentioned by Pheros, a Valm soldier meaning that her religion is still relevant during the events of Fire Emblem Awakening. 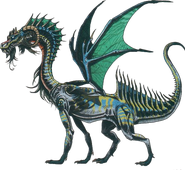 Concept art of Mila's dragon form.
Add a photo to this gallery

Retrieved from "https://nintendo.fandom.com/wiki/Mila?oldid=503679"
Community content is available under CC-BY-SA unless otherwise noted.