Nintendo
Register
Don't have an account?
Sign In
Advertisement
in: Class A articles, Wii U, Nintendo 3DS,
and 3 more

Social network
Miiverse was Nintendo's first social network and was available on the Wii U and Nintendo 3DS consoles and from the Internet. It allowed users to communicate by drawing or typing messages and posting them in game communities and to socialize by using Mii's. Miiverse was a Nintendo Network service. Your user account needed to be linked to a Nintendo Network account in order for you to use it. The service was announced to not be available for the Switch during the January Presentation.

It was announced on August 29th, 2017 that the Miiverse service was to be discontinued entirely on November 7th, 2017 on all platforms and in all regions.

Nintendo originally stated that user communities would be added, but this never happened before Miiverse’s shutdown in 2017.

Users could Yeah or Unyeah (like/dislike) posts from other users and view other users that yeahed the post.

Instant messages or personal messages could be sent to users on your friend list on Miiverse by tapping Messages in the Wii U version.

Your friend list could be viewed at any time by pressing the Home button and selecting Friend List. Once there, you could view your friends and their statuses, see if your friends had played any games with you, view friend requests, register friends, or change friend list settings.

The WaraWara Plaza was the Wii U version of the Mii Plaza or StreetPass Mii Plaza.

When a Wii U was powered on, or the Wii U Menu was loaded, you would see the WaraWara Plaza. This could only be done if the Wii U was connected to the internet. Other users' Miis would appear on your screen, along with their Miiverse comments about a selection of recent or popular games. If a Mii was tapped on, you would have the option to view the user's Miiverse post, reply to the post, launch the game that the post was related to, or open the game in the Nintendo eShop.

After the discontinuation of Miiverse, WaraWara Plaza became only able to show the default messages from Nintendo that are built in to every Wii U console, advertising the eShop, Nintendo Network IDs, and other internet features of the console.

On December 9, 2013, a new update to the 3DS abruptly introduced Miiverse without any announcement. This version of Miiverse acted mostly the same as its Wii U counterpart, with just a few minor differences, such as the lack of private messaging. The same Nintendo Network ID was able to be used across the Nintendo 3DS and Wii U versions of Miiverse.

Miiverse for Browsers and Application

On April 24, 2013, Nintendo launched Miiverse for web browsers. To login, you needed to enter your Nintendo Network credentials.

It was confirmed by Tom, one of the Miiverse community staff, on August 29, 2017, that the Miiverse service would come to an end on November 7th, 2017. All Miiverse related services officially ended on that day, including posting, commenting, viewing posts, and all in-game Miiverse functionality. In its place was a special collage of various Miiverse posts arranged in a picture saying thanks. This was taken down in 2019.

With the launch of Miiverse, there was a leak with a list of temporary titles to games upcoming for the systems. It had a few Nintendo 3DS titles which led to 3DS Miiverse as well as some a couple Nintendo titles being leaked. The titles were:

Nintendo later on patched out access to the debug menu.

One of the few problems with Miiverse is the adult users. Nintendo tried to address this issue through multiple ways: there is a system where if the drawing box recognizes the shape of a genital, it will not allow you to post the drawing, and most bad words are banned from being used. Moderation later checks and removes foul imagery.

There was also an issue where outside images could be posted on Miiverse for a while. They were restricted to the 3DS Miiverse but a games' communities did have to be restricted until it was fixed. 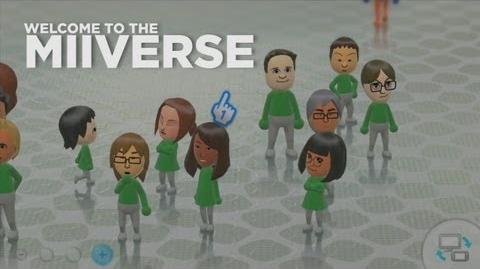 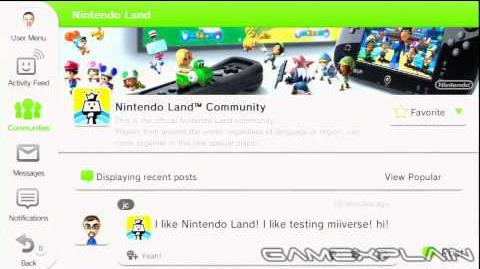