Metal Sonic is a character in the Sonic the Hedgehog series. He is a robotic version of Sonic. He made his first appearance in Sonic the Hedgehog CD. Dr. Eggman developed him to defeat Sonic, and went through many prototypes before creating this one. He also appeared in Mario & Sonic at the Olympic Winter Games. In this game he was a speed character alongside Yoshi, Sonic, Daisy, and Shadow. He also appeared in the third installment to the series, Mario & Sonic at the London 2012 Olympic Games. 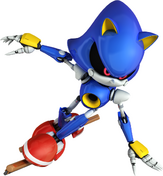 Mario & Sonic at the Olympic Winter Games.
Add a photo to this gallery

This Sonic the Hedgehog related article is a stub. Please help by expanding it.

Retrieved from "https://nintendo.fandom.com/wiki/Metal_Sonic?oldid=540983"
Community content is available under CC-BY-SA unless otherwise noted.