Meowser is a the name used for the Cat form of Bowser introduced in Super Mario 3D World. Bowser obtains the form only once during the final battle in The Great Tower of Bowser Land. He has white and orange fur with brown stripes similar to a tiger's, a ringed tail, cat ears instead of horns, whiskers, and his nose is black. His hair is colored red, white, and brown, his shell appears to become more gray-blue, looking similar to Dry Bowser's (but without red gaps), and the rings around his spikes are more red. Even his trademark roar becomes different, giving off more of a meow-like sound. Additionally, he is larger than normal Bowser. Like Cat Goombas and Cat Bullet Bills, the form is more akin to a transformation than a suit. The name is a portmanteau of "Bowser" and "meow", the onomatopoeia for the sound that a cat makes.

During the final battle in Super Mario 3D World, like Cat Mario, Meowser can climb walls and swipe his claws at his enemies. Unlike Cat Mario, however, his tail is large enough to whip, like Tanooki Mario, as well as retaining his ability to breathe fire (though he uses this less often). After the the player(s) attack him with a POW Block, Meowser uses the power of Double Cherries to become Double Meowser, spawning up to five doubles to fight them. The player cannot harm Meowser directly; the only way to finish the fight is to hit the Super POW Block four times at the top of the tower to defeat Meowser. The Clear Pipe to the Goal Pole will then be revealed.

Meowser will walk on all-fours and will start breathing fireballs when the player gets close to him, like with normal Bowser. If Meowser is given a Super Mushroom, his fireballs also get bigger. He can also sometimes breathe 3 fireballs in a circular motion.

Meowser can also roll off the ground and climb up onto the surface in front of the player or slide near the player.

The player can only place up to three Meowsers on a single course layer.

If the player gives Meowser wings, he can flutter for a little bit. Sometimes when he jumps off, he will flutter in the background and breathe fireballs from there.

If the player gives Meowser a parachute, he will float down before acting as normal.

Like with normal Bowser, Meowser is immune to jump attacks and will be defeated if he gets hit 20 times, whether they are through fireballs or with certain items. As Builder Mario, he can be defeated in 7 hammer whacks. With a POW Block, he will be defeated in 2 hits; he also flinches briefly after getting hit. He will be defeated instantly if a Thwomp hits him or if the player runs through him while invincible. Giant items can double the amount of damage on him as well. If Meowser is giant-sized, the number of hits he takes before getting defeated doubles. If Meowser is defeated, he falls down and leaves behind fireworks, unlike in the original game, where he is blown away before exploding into fireworks. 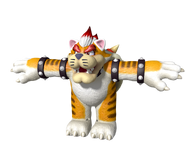 Model.
Add a photo to this gallery
Retrieved from "https://nintendo.fandom.com/wiki/Meowser?oldid=531641"
Community content is available under CC-BY-SA unless otherwise noted.