A Mega Mushroom is a rare variety of Mushroom found in the Mushroom Kingdom. It temporarily enlarges the user, allowing them to walk over and destroy everything in their path, including the largest and most powerful enemies. Mega Mushrooms made their debut in Mario Party 4, where they were depicted as normally proportioned Mushrooms with green Caps; in New Super Mario Bros., they received a more distinctive design, being much bigger with bulbous, red-spotted orange-yellow Caps. Mega Mushrooms hop along the ground and, in their initial appearance, would actively flee from Mario. Its opposite counterpart is the Mini Mushroom, which shrinks the player.

Mega Mushrooms first appear in Mario Party 4, with a light green cap somewhat resembling a 1-Up Mushroom. It can be obtained by landing on a Mushroom Space, purchasing it from an item shop, getting it from an Item Bag, or winning a mini-game on the board. Mega Mushrooms let the player roll two Dice Blocks (and move 2-20 spaces), and enlarge the player to a gigantic size that lets them flatten other players and steal ten coins from them as they stomp across the board. However, board events will be bypassed (except for events involving Bowser at Bowser's Gnarly Party). If the player rolls the same number on both Dice Blocks, the player gets 10 Coins (30 coins for two "7's"). Additionally, a Super Mega Mushroom is available, colored entirely translucent blue. It does the same thing, but with three Dice Blocks instead of two.

Mega Mushrooms would finally make a second appearance in the series in Mario Party 10, using their design from the New Super Mario Bros. game. Mega Mushrooms only appear in the amiibo Party mode, and act similar to how they did in Mario Party 4, where the user will become giant and take coins from other players upon passing them.

In Mario Party: Star Rush, Mega Mushrooms appear in the Boss Battle minigame Bowser's Space Race, where grabbing it causes the player to become giant and earn three points from throwing their bomb at Bowser.

In Mario Party: The Top 100, Mega Mushrooms appear in the updated minigame from Mario Party 3, Mush Pit, replacing the Mushrooms from the original game.

Mega Mushrooms reappear in New Super Mario Bros., where they would be given their current design, and cause Mario to grow to a giant size. In this colossal form, Mario can stomp across the level and crush near anything in his path - enemies, blocks, Warp Pipes, and even the flagpole at the end of the level.[1] Additionally, ground-pounding in Mega form causes a group of Goombas or Coins (or both) to fall from the sky. Destroying items and objects fills the bar at the top (referred to as the Mega Meter in the instruction manual) with yellow. Each segment turns as it is filled; when Mario shrinks back to his Super form, a 1-Up Mushroom appears for each green segment filled, up to a maximum of five 1-Ups.

These mushrooms are rarely found, and almost always come from Orange Toad Houses or Red Flying ? Blocks. Besides the Toad Houses, they only appear in four levels: World 1-1, World 1-2, 4-4, and 7-5. If Mario or Luigi ground pounds a block containing a Mega Mushroom, it still appears from above. The player is not completely invincible in this form, however; landing on bricks that cover a large enough gap risks Mega Mario smashing through and falling, while lava and poison still instantly cost the player a life on contact.

The Mega Mushroom makes a return in Super Mario 3D World, making it the item's first appearance in a 3D Mario title. It works as it did in New Super Mario Bros. 2. However, if someone ground pounds, they now create a small shockwave that hits all nearby blocks and enemies. As in the other games, Mega characters can destroy Warp Pipes. Also, the characters' voices now become slightly lower-pitched while the power-up is active, similar to Mario Kart Wii, and the Super Mushroom in the Super Smash Bros. games.

In Super Mario Run, a Mega Mushroom makes a cameo appearance as a statue in Kingdom Builder. It can be won from the Bonus Game in Remix 10 mode as a 4★ item.

In Mario Kart Arcade GP, the Mega Mushroom appears under the name Giant Mushroom. It is an item obtainable from the Item Box. When players use this item, they and their kart temporarily grow bigger.

In Mario Kart Wii, the Mega Mushroom returns as an item obtainable from the Item Box. Players can obtain it if they are anywhere from 4th to 8th place, with them also being able to obtain it in 9th place in VS. races. In addition to growing bigger, this item causes the player character's voice to get much deeper. Furthermore, it now offers the players the ability to squash other players for a certain amount of time, reducing their speed and making them lose their items. While this item is active, the players receive a speed boost and cannot slow down when going off-road, and they are invincible to all dangerous things, except for the Star, Bullet Bill, and Blooper, giving them the power to destroy any items or any course obstacles, except those that are big and metallic (such as Chain Chomps). If players get hit by Lightning while they are big, they shrink back to normal size rather than becoming tiny. The effect also ends prematurely if players fall off the course. The Mega Mushroom's theme music from New Super Mario Bros. is played for the duration of the item's effect.

The Mega Mushroom reappears in Mario Kart Tour and works the same way as in Mario Kart Wii. However, Mega players are vulnerable to rival racers' items, reverting to normal size if hit, and they do not gain speed nor off-road advantages. Also, the music does not change while the item is in effect.

The Mega Mushroom appears in Super Smash Bros. Brawl as a sticker. In The Subspace Emissary, it can be used by any fighter to raise the amount of damage healed by food by 2 percent.

In Mario & Luigi: Bowser's Inside Story, during his Vacuum command tutorial, Broque Monsieur sometimes attacks by using a Mega Mushroom to make himself giant. Bowser needs to punch his body to avoid being rammed. This will knock Broque Monsieur's (still giant) head off, so Bowser can punch it to earn extra coins until his body picks it up again. In Mario & Luigi: Bowser's Inside Story + Bowser Jr.'s Journey, along with Broque Monsieur using the Mega Mushroom, Bowser Memory M uses the Mega Mushroom as a part of one of its attacks (replacing the Super Mushroom from the original game).

A Mega Mushroom appears as a part of Luigi's Bros. Attack Mega Thwonk in Mario & Luigi: Paper Jam, where Luigi eats one to become giant.

In the Wii version of Mario & Sonic at the Olympic Winter Games, the Mega Mushroom appears in Dream Curling and Balloon Blast, where they can be obtained from an Item Box. The Mega Mushroom makes the character twice their original size. In the Nintendo DS version, they appear as panels in Curling Bowling which cause the stone to increase in size when it slides over, giving it more power, but making it harder to curl.

Mega Mushrooms appear once again in Mario Tennis: Ultra Smash, where they make characters big, allowing them to hit the ball more easily. Instead of the original music from New Super Mario Bros., a rock cover of the original tune plays when using the Mega Mushroom. The effect lasts for 30 seconds, but can end prematurely if the player endures a Body Shot. As in Mario Kart Wii and Super Mario 3D World, the characters' voices will become slightly lower-pitched and echoing while the power-up is active. Three seconds before the item wears off, the character flashes white before shrinking back to normal size.

Other appearances and references

While the Mega Mushroom does not make an appearance in Super Mario 64 DS, the Super Mushroom has the same effect as the Mega Mushrooms of later games, as it temporarily makes the characters giant, greatly reduces their jumping abilities, and allows them to destroy nearly anything in their path. The player will earn an extra life for every object destroyed from the eighth onwards.

The Mega Mushroom was originally going to return in New Super Mario Bros. Wii, but was removed from the final game due to causing a problem with multiplayer: the player would be able to destroy everything while taking up space on the screen, limiting the players.

The Mega Mushroom was also going to return in Mario Kart 7.

The Mega Mushroom makes a cameo appearance in the Wii U version of Tekken Tag Tournament 2 as part of its exclusive content.

Although the Mega Mushroom itself does not appear in the Super Smash Bros. series (excluding the aforementioned sticker), the Super Mushroom has a similar effect to it.

In Paper Mario: Color Splash, a small Toad in the Sacred Forest asks Mario if he had eaten a Mega Mushroom.

In Mario + Rabbids Kingdom Battle, artwork of a Mega Mushroom can be found on a poster in the laboratory in the introductory cutscene. 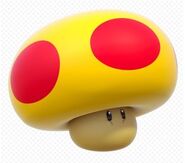