Meaning: Underworld Queen Medusa) is the central antagonist of the Kid Icarus series. She first appeared in the original Kid Icarus, and returned along with the rest of the cast in the Nintendo 3DS game Kid Icarus: Uprising.

Much like Palutena herself is based on the Greek goddess Pallas Athena, Medusa is based on the mythological character with the same name. The relation between the two characters also derives from the myths, where Athena transformed her into her monstrous shape.

Medusa is the main antagonist of the game, who along with Palutena, was the co-ruler of the kingdom Angel Land. Medusa, however, hated mortals and used the power of darkness to destroy their crops and turn them into stone. When Palutena found out about Medusa's doing she turned her into a hideous monster and banished her to the Underworld.

Medusa did not want to stay with her arms crossed, so she decided to take revenge on Palutena. Medusa joined forces with evil spirits and monsters in the underworld and managed to subdue Palutena's army. She banished Palutena and gave the Three Sacred Treasures to her most trusted monsters for protection.

In the last effort to regain the power of the land, Palutena used her last power to free the angel Pit from his prison and to grant him a sacred bow. Using this he set out on a quest to retrieve the three treasure and using these he was able to defeat Medusa once and for all.

After her absence in Kid Icarus: Of Myths and Monsters, Medusa returns in Uprising for Nintendo 3DS, as the secondary antagonist. After twenty-five years since the events of the original Kid Icarus, Medusa is resurrected and begins to unleash the Underworld army upon the world to exact revenge for her defeat. Prior to her redefeat at Pit's hands in Chapter 9, Medusa casts doubt on her own intentions as a villain, revealing that her memory of her past is hazy and that she does not know who brought her back.

In addition, she criticizes Palutena and other gods for being selfish and having intentions not as pure as the majority think they are. Eventually, the true villain is revealed to be Hades, Lord of the Underworld, and as payback for using her as a puppet, Medusa aids Pit and Palutena by attacking Hades in the final battle. She is apparently destroyed after Hades hits her with a devastating punch.

Medusa, Queen of the Underworld)

"The one-time Queen of the Underworld, exiled by Palutena long ago. Twenty-five years ago, Pit defeated her once and for all... or so it seemed. Now resurrected and thirsty for revenge, Medusa leads an army far more powerful than ever before."

"The only comfort throughout Medusa's quarter-century in exile was the thought of bloody retribution against Pit and Palutena. Now, facing the angel after all these years, Medusa's wrath is only matched by her fervor for revenge."

"Long ago, Palutena cursed Medusa with this hideous form. Unable to face the monstrosity she had become, Medusa used her magic to maintain a mask of beauty - a face that falls when she's forced to put all her strength into defeating Pit."

"Medusa saves the day! Medusa's surviving spirit stops Hades before he can deliver the finishing blow to Pit. In her weakened state, she can't hold him off forever, but the goddess gets an A for vindictive tenacity."
Spoilers end here

Medusa as she appeared in Captain N: The Game Master. 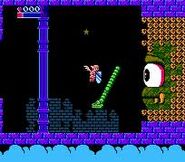 Medusa's appearance as the last boss in Kid Icarus.

Medusa's previous appearance, grotesque in contrast to her new redesign.
Add a photo to this gallery

Retrieved from "https://nintendo.fandom.com/wiki/Medusa?oldid=525392"
Community content is available under CC-BY-SA unless otherwise noted.