Masked Dedede is King Dedede´s Alterego, now with a metallic mask and a mechanical hammer instead of normal one. He makes his debut in Kirby Super Star Ultra in the sub-game Revenge of the King.

Masked Dedede appears in the sub-game Revenge of the King as the Final Boss. In this story, he tries to take revenge on Kirby after everything that happened but fails. Kirby when arriving at Mt.Dedede it does not happen the same as in Spring Breeze, in this time Kabula appears and Kirby manages to overcome her when entering Mt Dedede. Bandanda Dee and King Dedede will speak during Kirby´s progress on the stage. When you get to King Dedede, you must face him in an electricity cage and he wears a metallic mask similar to Meta Knight's. He also has a New Hammer that makes him stronger. Masked Dedede battles well, but ends up defeated again.

In the credits, Dedede is seen depressed while walking to the sunset, and then, his army of Waddle Dees makes him company.

Masked Dedede appears once again as a boss in Kirby: Triple Deluxe, this time controlled by Taranza and is one of the last bosses in the game, only succeeded by Queen Sectonia and her other forms. The first phase is somewhat similar to his first appearance, but, in the second phase, he uses a Halberd Axe and his robes become Dark Purple, but Kirby defeats him again.

Masked Dedede's attacks are similar to those in Kirby Super Star Ultra, but with minor differences. The most noticeable difference is that Dedede's inhale is stronger and that he spits Kirby at the screen. When he is defeated, Masked Dedede's hammer breaks and his mask cracks after the first round. Taranza then strengthens him, causing him to roar angrily as his robes turn purple and he steals a large decorative axe, hoping to take his revenge on Kirby. Masked Dedede's Revenge can spin his axe around like he did with his hammer, dizzying him for a few seconds afterwards. He can also walk across the whole screen while swinging his axe in many directions. In Dededetour, since the player is Dedede, they face Shadow Dedede who has many similarities.

In Kirby's Blowout Blast, a Giant version of Masked Dedede appears as a secret final boss.

His attacks consists of upgraded moves as well as new additions such as spinning his hammer around, jumping 3 times instead of 1, firing missiles, and spewing a flamethrower. Also, his boss theme is a remix of his theme from the Japan-exclusive spin-off game Kirby's Super Star Stacker. 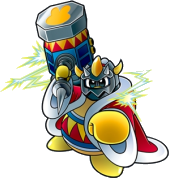 Retrieved from "https://nintendo.fandom.com/wiki/Masked_Dedede?oldid=526942"
Community content is available under CC-BY-SA unless otherwise noted.