Romaji: Oonishi Masato
) is a sound engineer for Nintendo who joined in 2009. His first work was programming the improved voice recognition for Nintendogs + Cats. He also worked on the Wii U and the New 3DS home menus' sounds, as well as Nintendo Badge Arcade, where he voiced the Arcade Bunny.

Onishi at his workstation in 2015. 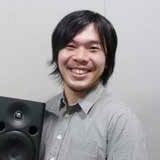