Mario Tennis Aces is a multiplayer sports game for the Nintendo Switch and the eighth installment in the Mario Tennis series. It is also the first game in the series since Mario Tennis: Power Tour on the Game Boy Advance to feature a story mode, in which Mario must advance through a number of missions and stop a powerful tennis racket, Lucien, from destroying the Kingdom of Bask, the game's setting. While the gameplay engine appears to be based on that of Mario Tennis: Ultra Smash, it refines the traditional tennis gameplay of the series by introducing several new techniques. One of the prime features in this game is an energy gauge which can be charged throughout the course of a match by rallying the ball. Energy grants the ability to slow down the time during a match in order to catch a ball more easily. Under certain conditions, it can also be used to stop time and launch the ball from a first-person perspective to the other side of the court through Zone Shots and Special Shots. These are powerful types of shots that can damage or break the opponent's racket if not countered correctly.

The game also offers expanded online features, mostly through tournaments and co-op challenges, where players can participate to unlock exclusive content. Since release, the game has been updated with new playable characters, story mode levels, modes of play, and tournament features, most notably a rank classification.

The gameplay is generally the same as the past entries with Simple rules stripping the extraneous rules. Matches are available up to 4 players and the game supports motion controls with a single joy-con. The game also has a story mode with many varied moves.

The main new mechanic is the energy meter. Players can use their generated energy meter to perform Zone Shots which are powerful shots the player can aim using motion controls. If the player hits the opposing player's racket straight on, it gets damaged and if it gets damaged 3 times, it will break and that player must forfeit the match. To counter this, the opposing player can use Zone Speed using up their own energy meter to slow down everything to hit the ball. if a player fills up their entire energy meter, they can spend it all to perform a special shot that can destroy the opposing player's racket in a single shot. The only way to avoid breaking the rackets is to use the Block move which is a perfectly timed swing that reflects the shot to the other side with no damage. To fill up the energy meter, the player can perform risky Tricky Shots though it will generate with long rallies.

In this story mode, the player moves on a map and must face various challenges on their journey in a stage based format a la New Super Mario Bros. Luigi has awakened evil Tennis deity called Lucien and it corrupts him and the evil characters. Mario must save Luigi with tennis against various bosses. After defeating each main boss, he collects a Power Stone. Mario can also collect different rackets over the course of the journey with different attributes and improve his stats. If all the rackets break, the player receives a game over.

The game includes more than 15 playable characters. They are spilt into 6 different classes. Characters in bold can be unlocked through online tournaments during a certain month. If players don't unlock them in time, the character will be free for everyone on the 1st on the following month.

All stages must be unlocked through Adventure mode apart from Marina Stadium.

Mario Tennis Aces received generally positive reviews from critics. Praise was directed at the visuals and many welcomed new additions of gameplay, but minor criticism was directed at customization and the story mode, with some considering the latter not being rewarding or satisfying enough. The Swing Mode also received mixed reception, with points of contention directed at its responsiveness. The game currently holds a score of 75 on Metacritic based on 84 reviews,[1] and a score of 73.38% on GameRankings based on 37 reviews.[2]

Tristan Ogilvie of IGN gave the game a score of 7.5/10, praising the visuals, the court gimmicks, and the multiplayer mode, but criticized the story mode (considering it bare-bones, with nothing making it a fresh and satisfying experience), and also criticized the way local multiplayer works, stating "The biggest problem with Mario Tennis Aces's Adventure mode is how poorly it incentivises you to keep playing. I had completed all 27 of its levels and unlocked all of its courts and rackets by the time I was on level 34, which was around a half a dozen hours of game time. Out of curiosity, I replayed a number of the challenges and boss fights several more times over to grind my way up to level 55, but was rewarded with absolutely nothing aside from incremental boosts to Mario's stats, thus making the existing challenges even easier. With no New Game+ or more challenging versions of its levels to unlock, or even the option of playing through it with a different character, Mario Tennis Aces's Adventure mode becomes increasingly simple and repetitive the more time you put into it."[3] In a more positive review, Mike Diver of Nintendo Life gave the game an 8/10, praising what he believed to be vast improvements over its Wii U predecessor Mario Tennis: Ultra Smash, stating "Where [Mario Tennis:] Ultra Smash's extras were a pure Monkey Island's worth of living without that particular piece of junk – here's your context, kids – [Mario Tennis] Aces stuffs its kit bag with activities until the zip's positively pinging off across the locker room like a smartly volleyed can of energy drink. Not everything is evenly fleshed out, but whatever your preferential way to play, there's plenty to get stuck into, both solo and with pals."[4] In a slightly more lukewarm review, Justin Clark of GameSpot gave the game an 7/10, praising the game's new playing mechanics over past games as well as the story mode's incentive to teach players of the new mechanics, but had mixed to somewhat positive feelings about the story mode, stating "The story itself is ridiculous, but ridiculous in that very specific, quirky way Nintendo has been getting away with for decades. During the Mushroom Kingdom's annual tennis tournament, an evil tennis racket--yes, really--named Lucien takes possession of Luigi and flies off to find five Power Stones that will help him take over the world." He was also more critical of the online play, panning a stark lack of features as his main issue.[5] 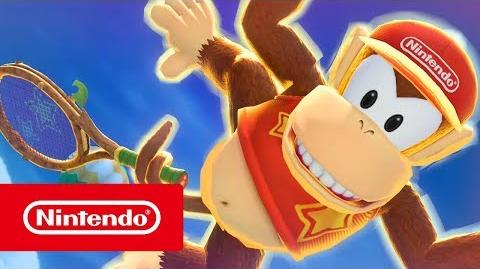