This game has playable Miis

This game requires the Nunchuk

Meaning: Mario Strikers
) (known as Mario Strikers Charged Football in Europe & Australia and in South Korea as Mario Power Soccer) is the sequel to the 2005 game Super Mario Strikers for the Nintendo GameCube, developed by Next Level Games. Up to four players can participate in this game as play soccer, attempting to kick the ball into another opponent's goal; the soccer in this game, however, has several differences than the real soccer, such as the ability to tackle other players with minimal penalty, using Mario-themed items to give players an advantage over their opponents, and playing with stage hazards effectively. This game places a higher emphasis on individual character attributes compared to its precedent, by not only assigning stats, but by also giving team captains a unique Super Ability and the Mega Strike, an opportunity to score up to six goals. Meanwhile, a team itself can be composed of several different Mario species, each with also unique attributes including Skillshots. Another introduced mechanic is the power level of the ball. Indicated by the color of the glow, the shots of the ball become more quick and powerful the more active it is, thus making it easier to score goals with. The game, as its predecessor, also stylistically differs from most Mario games with more realistic sci-fi tones, from the menu interface to the stage designs, in contrast to the more common bright and whimsical cartoon themes.

In addition to the local single-player and multiplayer modes, the game also features online regional multiplayer, which uses the Nintendo Wi-Fi Connection. Unlike most games that have Wi-Fi features, Mario Strikers Charged's game data can be copied (but not moved) onto an SD card. However, all Wi-Fi related data cannot be copied. It features 12 Mario characters as captains and 8 characters as sidekicks for your team.

The gameplay is very intense, and much of the game is very physical. The team consists of the captain, three sidekicks, and a goalie. Players must use teamwork to score a goal. A goal is scored when a Captain or Sidekick kicks the ball into the goal. However, the ball can be blocked by the Goalie, Kritter. Additionally, the ball can be stolen by the opposite team, by tackling and slide-tackling. Player is also able to use items to assist them in the game, which can be obtained by doing charge shots, or by being tackled when the player does not have possession of the ball. Another aspect of the game, is the Captains Mega Strike, which replaced the Super Strike from Super Mario Strikers. If done right, captains that performed the Mega Strike may be able to score up to six goals in one hit. Captains can also use a move known as the Super Ability, which can be used when they gets a special item (their own head). Sidekicks are able to perform a special tactic known as the Skillshot. This is a special tactic allows them to use a powered-up shot, that will have a better chance at scoring a goal.

Overall, the visual style and graphics are similar to the GameCube version, though with improved gameplay.

The captain is the leader of the team and the only character that can perform the Mega Strike. Captains also may receive a special item, the Captain Ability. 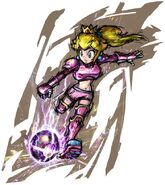 Perhaps the most anticipated mode, players with access to the Internet will be able to play with anyone in their region though Nintendo Wi-Fi Connection (WFC). For example, a player in Europe can play with anyone in that continent, but cannot play with a friend in America - Nintendo excluded worldwide play to avoid lag. Matches are available for any combination of four players on two teams as long as at least one player controls each team.

Random matchmaking is possible for players who choose to play ranked matches. However, it is also possible to play with friends by registering their Wii System Codes beforehand. The downside of this is that points will not be recorded in online ranking. Friend play options are equivalent to Domination Mode options.

Each player is identified by the Mii of their choosing. Using this system, a "Striker of the Day" is crowned based on the player who earned the most points day-by-day in a week time period. Points earned in unranked matches are not counted. These points are scored by winning matches (ten points), scoring goals (one for each goal, but goals after ten in a game do not count), and not disconnecting and taking a loss (one point). The player will lose points if he or she disconnects.

The players will be able to choose from any captain to play as in WFC Mode, even if they haven't unlocked the unlockable captains.