Romaji: Mario Kāto DS) (also called MKDS, Mario Kart 5, or MK5 and known as Mario Racing DS in China) is a racing game and the fifth installment in the Mario Kart series and the second game for a handheld console. Released in November 2005 for the Nintendo DS, this was the first game that used the Nintendo Wi-Fi Connection. It was released first in North America, in November 14, 2005, being the first and only mainstream Mario Kart game to be released first in North America. Unlike its predecessor, Mario Kart: Double Dash!!, it retains the traditional single-driver kart racing elements in the Mario Kart series, where players race against seven competitors in obstacle tracks, using item-based weaponry to gain further advantages over their opponents. It is the first handheld Mario Kart title to use live-rendered 3D graphics for most of the objects in the game, including characters, vehicles, and race-tracks.

Mario Kart DS expands and introduces mechanics that would later become the standard in future titles, with the most standout and notable being the Retro Grand Prix, and the advent of retro courses in general, that revamps tracks from all previous titles from the Mario Kart series. Mario Kart DS was the first Mario title to support Nintendo Wi-Fi Connection, allowing players to race against opponents using online services across the world. However, Nintendo Wi-Fi Connection has been discontinued on May 20, 2014, making playing Mario Kart DS online no longer possible. Mario Kart DSs unique mechanics introduced include its single player-oriented mission mode that tasks players to complete objectives in a short series of special events, including defeating Mario franchise bosses and the ability to create custom emblems for their vehicles. Mario Kart DS takes advantage of the Nintendo DS features as well, using the bottom screen to display other HUD elements such as two types of maps, character order, and what items their opponents have.

Please remove this template once or when image(s) have been added.

There are a multitude of different items listed below which can be obtained from item boxes scattered around the track, which randomly generate items to the drivers according to their position in the race. They can be used to help the drivers, or disrupt their opposition with varying effects.

The items in bold are newly introduced in this game.

The Mario Kart series has had many obstacles in almost every course, and that also includes Mario Kart DS as well as later games. Here is a list of all the obstacles that you will encounter.

This is the newest feature of the game. An emblem is a decal or picture that appears as a sort of symbol for someone on their kart. The emblem appears only on certain places on a kart, and depending on where its put, the emblem may be smaller, bigger and/or stretched out. The player also has the ability to choose from various patterns ranging from a Star to Thunderbolt and also the shape of Mario's face. The player also can choose not to use a custom emblem and to use an original emblem already designed for the a character. Emblems are displayed during All matches, whether VS, Time Trial, or online via Wi-Fi connection.

Missions mode is a new single-player mode for Mario Kart DS which the player must complete some tasks and earn a ranking similarly to that in Grand Prix mode. It involves seven levels, each containing eight "missions" and a boss battle, all of which are taken from Super Mario 64 DS. Almost always the ranks depend on how much time is left or taken. There are varying mission types:

There are some one-time isolated missions that are self-explanatory. Each mission takes place on a course, often blocked off in some areas (sometimes even a battle course) and players are given a character in their own standard kart (CPU players are also in standard karts). None of the unlockable characters are playable, and Bowser and Donkey Kong do not fight a boss. Sometimes mushrooms are laid across the track to help the player to complete the mission. When at least a ★ ranking is achieved on all missions and bosses in the first six levels, Level 7 is unlocked. Boss battles are unique. They have their own battlefields and different strategies are used to beat them. When the boss battles of Level 6 and 7 are completed, the first version of the staff credits will roll.

The following table includes the mission number, in-game mission description, time limit for the mission (0:00 signifies it's a race, and the mission finishes at 2:00 if the race is not completed), course, and character that the player plays as. 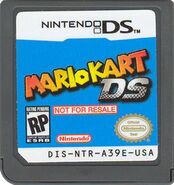 The US cartridge.
Add a photo to this gallery

Mario Kart DS was the first Mario Kart game to support online play (since the discontinuation of Nintendo Wi-Fi Connection, online play is no longer possible); though it's worth noting that it's the second Mario Kart game to support online connectivity, with the Japanese version of Mario Kart: Super Circuit being the first (the use of online connectivity for this game was made primarily to exchange ghost data with other players). Being one of the first Nintendo DS games to feature wireless connection, the game mode required some technical changes in order to avoid connection malfunctions and long time loads during online play.

The following changes and restrictions were applied to prevent excessive lags:

Players could connect using a wireless connection or a Nintendo Wi-Fi USB Connector (preferably high-speed.) Racers would choose to search for other players in "Friends" (more info below), "Rivals" (players with a similar record), "Regional" or "Continental" in Non-American versions of the game (players in same country or continent), and "Worldwide", the latter possible to cause long lags. Other racers searching in the same category were randomly grouped. The game tried to find four players, but eventually settled for three or two if necessary. Players chose their characters, karts, and the course they wanted for the first of four races. In addition to the 20 courses listed in order of when it is encountered, there was also a random button. After everyone's selection was placed, a course was chosen based on the responses. If all players each picked a different course, the system randomly picked one. If four players chose two courses, two each, the game randomly selected from those two. On the other hand, the most voted course by a group of users was selected to race. It proceeded like so for four races, then the points were tallied up, and after the match, a player's wins and losses were totaled.

Players could continue after the match to play the same racers again or quit to restart the process to find other players.

A) Friend Code System. Each copy of the game comes with a 12-digit code known as a "friend code". Players could enter codes into each other's "friend roster" to create a friend list, where Wi-Fi records between the players were stored. When a friend was online at the same time, a symbol would appear above the Wi-Fi strength symbol, whether trying to find racers or during racing. Yet, both (or more) players must have had each (or all) of their friend codes registered and be looking in the friends section at the same time to hook up. If the player were to find a racer to compete against elsewhere online, there was no communication for a friend code swap; the only way to race again is to do it right away by selecting continue after a match.

Problem: Disconnecting racers change the outcome of the match; it is later reflected in the match records.

B) Disconnecting. Take this scenario into consideration:

Bob started in a four-player match, but two people have disconnected since, and he is now in a two-player match against a three-star player, and has come second and third in the first two races. It is 20-11. Josh wins the next match, bringing the totals to 25-21. But, in the fourth race, the three-star player is a full half-lap ahead with one lap to go. Josh realizes that he might not win this race; however, Josh has researched about Wi-Fi connections and has learned a trick. He leaves his DS untouched, bringing his kart to a stop, then finds his wireless router, and disconnects it. According to the record-book, Bob has won the match from which he has disconnected.

Mario Kart DS received critical acclaim. It currently maintains a 9.2 average at Gamestats, the highest score for a Nintendo DS game on the site (as of December 2006).

Gamespy reviewer Bryn Williams said that online, Nintendo "trimmed it back a little too much for my liking", but was certain that "Even with a few online flaws, this is the best Mario Kart ever." With a rank of 5 out of 5 and describing the multiplayer experience as "great". GameSpot reviewer Justin Calvert had similar quips with the online feature: "Whether these opponents were leaving voluntarily or because of network problems is anybody's guess, but it's equally irritating either way." He finished up similarly by saying "Mario Kart DS is without a doubt one of the best games to hit the Nintendo DS to date." Mario Kart DS received a score of 9.2 out of 10 and was regarded as GameSpot's Editor's Choice and DS game of the year.

IGN has given an overall score of 9.5 out of 10, granting the game the IGN Editor's Choice Award and DS game of the year. Reviewer Craig Harris commented that "it's just hard to ignore just how limited the online presentation is", but ended the review with this: "The only way to finish this review is just to say it: this is the greatest Mario Kart game ever developed, and is without a doubt the best DS game of 2005".

References to other games

Retrieved from "https://nintendo.fandom.com/wiki/Mario_Kart_DS?oldid=521391"
Community content is available under CC-BY-SA unless otherwise noted.