Mario Kart Arcade GP (also called MKAGP) is an arcade game that was developed by Namco in 2005. It is the 5th game in the Mario Kart series and features new characters such as Pac-Man and Ms. Pac-Man. It also features a camera, that will take your picture, than add Mario items such as a Mario hat to your face depending on which character you choose. Mario Kart Arcade is also the Mario Kart game with the most items. There are two types of models: one without the "data card" dispenser and slot, and one with both. A follow-up called Mario Kart Arcade GP 2 was released in 2007. The game runs on a modified version of the Mario Kart: Double Dash!! game engine.

To play the game, the player has to insert a certain amount of money or tokens into the game or in some cases, swipe a special card such as a Timezone Powercard. First, they can adjust their seat within the time limit by moving a lever near their feet and sliding to any position on the arcade machine. After that happens, the player can choose a character to play with. Then they have to take a picture of themselves within the time limit: if the player didn't take the picture; a countdown starts to force them to take it. The Photo taken will frame the player's face with Mario's Hat and Moustache. When that is done, the player will pick a mode on the screen; "Grand Prix" or "Time Trial"; again within the time limit.

If the player picks "Grand Prix";, they can pick any cup to play within the time limit. But if they pick "Time Trial", they attempt to beat a race-time record in one of the 24 courses in this game with the Triple Mild Mushrooms. If the player picks a cup, they cannot play a locked course: they have to play the available courses in the cup to unlock the other reversed courses. After that, a roulette of basic items comes up, and if the player stops the roulette, they receive the items in the rows whenever they get an Item Box. When that's over, the item descriptions show up, and the player attempts to learn how to use it.

Then, the racing starts. If the player places first, they will move on to the next course, and if they receive any lower rank, they must redo that same course. Either way, they have to pay the machine in order to race again.

Unlike other Mario Kart games, Mario Kart Arcade GP has 93 items, of which 72 are new. Some drivers can obtain special items that other drivers cannot obtain, much like Mario Kart: Double Dash! The player can use only three per race, and each track has a different selection of items to use. Completing a certain cup unlocks a new item.

Players race in 24 courses in six stages with each stage having four courses and a challenge; the first two are forward, last two are similar but with changed gimmick and environment, (e.g. Mario Highway is set on sunset instead of daytime, Bowser's Castle has blocks that block several parts of the track) and a challenge that is specific to each stage. Each race involves a six-kart dash to the finish (one player and five CPU players). The goal of each race is to finish in first place within the time limit. Once the player wins a race for the first time, they are rewarded with the next race in the stage. When completing the fourth stage, the player is rewarded with an item. Afterwards, a "challenge game" stage comes up, and are just like Missions from Mario Kart DS which they must complete to earn a special item exclusive to the character and finish the stage. If the player is unable to complete the challenge, they won't receive the trophy of that stage. If so, the player must complete a race within the cup in first place to try the challenge again. In Special mode, "+ Items" are unlocked after each win, and in 150cc unlocking items goes back to the former, but the item unlocked is a "Triple item".

Coins can be collected through out races to increase top speed. Prior to Special mode, their effect helps in completing the race more quickly. During Special mode and beyond, the difficulty of the races outweighs the effect of coins giving them very minimal use.

Three items are set in each course randomly, but on the fourth course however, the player is given a chance to pick three items to use during the race from their collection. During the first three courses of the Rainbow Stage, the player is first given no items to use, then only able to use Thunder Sticks, and finally only able to use Dash Mushrooms. Three items of the player's choice are used during the fourth course. In Special mode, three items are chosen for every race including all races on Rainbow Stage.

Note: The Rainbow Stage can only be unlocked if the player finishes the first five cups (Similar to the Special Cup in Mario Kart Super Circuit).

Once the player has completed the Rainbow Stage for the first time, Special mode is unlocked. In Special mode, the player can win "+ Items" which are upgraded versions of their weapons while still taking the same item slot. The rivals also become much harder and several courses will have much more gimmick. The first two courses on the Special mode are also changed to reverse mode (not to be confused with the Mirror engine class as the course in this mode is simply played backwards) while the last two courses are played normally.

Once Special mode is completed, 150cc mode is unlocked and all racers have gold karts. The character's last special item will be a "+ Item" after beating Robot Mario on Special mode. Difficulty is slightly easier and "Triple items" will be unlocked rather than "+ Items". This mode does not play like the usual 150cc mode in the main series, but rather like 200cc mode from Mario Kart 8 (which was not released until nine years after Mario Kart Arcade GP). Robot Mario and other challenges prior are not played on this mode, rather only six "Triple items" are unlocked after completing each stage.

Once 150cc Special mode is complete, a unique credits screen is shown with a message at the end saying "Grand Prix Mode complete! Thank you for playing!!". Afterwards, both 150cc and Special mode are able to be replayed with all weapons unlocked.

The player races on one of the 24 courses to try to appear in the top ten.

Note: The Rainbow Stage is automatically available in Time Trial, regardless of the players Grand Prix stats.

When the player inserts credits, the game starts an opponent search for a limited time (something like Bark Mode in Nintendogs) which, when other players start opponent searching, links the two people together for a VS. Match. Up to four people can link together. Unlike Grand Prix, a VS. race takes place with four karts per race and each player gets three items at random. If less than four people gather for a race, then CPU players are added depending on how many people join: 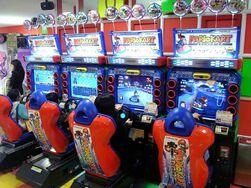 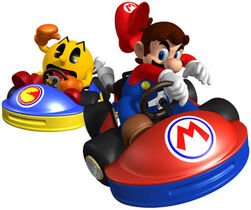 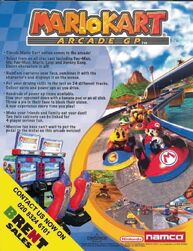 (*This feature was used in this game only)

(**This feature was also used in Mario Kart Arcade GP 2)

Although the gameplay was praised, the game was reviewed negatively for its high cost. Critics noted the lack of play from the video game and made it face huge amounts of criticism at its release.