The calculator will automatically be showcased on the bottom screen when you press the application's button on the DSi's menu. Mario will be stationed in an underground stage on the top. Pressing left and right on the d-pad will cause him to go in the corresponding direction. On this stage, the player can add, subtract, multiply, and divide. He or she can also find the percentage of a number too. 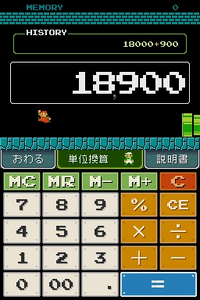 There is a pipe on the right side of the screen, and if Mario enters it the screen will change and Luigi will pop out of the other side. In this screen the calculator will turn into a unit converter.

An update to the calculator was made in December of 2009. It is unclear what the update did. The update can be implemented to the application free of charge.

Retrieved from "https://nintendo.fandom.com/wiki/Mario_Calculator?oldid=517404"
Community content is available under CC-BY-SA unless otherwise noted.