Malphas is a Demon with a crow-like appearance. Malphas is often affiliated with knowledge, curiosity and mystery but those traits are what makes him so dangerous as he is capable to tear anything or anyone apart in the name of this same curiosity. Umbra Witches can summon either its full body to attack their enemies or its wings to fly.

Malphas is first summoned to eliminate Fortitudo in Chapter IV. It is also summoned when Bayonetta use a Climax attack on an Inspired.

Malphas' body never appear in Bayonetta 2, but its wings are seen comming out of Bayonetta's back when she need to fly in order to fight an airborne enemy.

"An enigmatic raven-black bird shrouded in the mysteries of the sky. Ever curious, Malphas has filled itself with all the world's knowledge and mysteries. However, this same curiosity has led to a rather brutal demeanor, causing the bird to tear those it encounters to shreds with its sharp beak and razor-like talons." 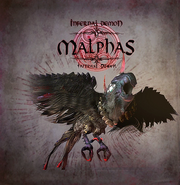 Malphas' page in the Book of Infernal Demons.
Add a photo to this gallery
Retrieved from "https://nintendo.fandom.com/wiki/Malphas?oldid=527351"
Community content is available under CC-BY-SA unless otherwise noted.