Magicant is a stage in the 3DS version of Super Smash Bros. for Nintendo 3DS/Wii U based on the Mother series, mainly the area of the same name in Earthbound & EarthBound Beginnings. The stage is unlocked by unlocking Ness.

The general layout of the stage is fairly standard with a lowered center platform and two higher platforms at the sides with the one on the right being higher but a bit narrower. The platforms are passable and can be potentially spiked if the player is not careful. A platform appears beneath the main platform occasionally.

During the match, a Flying Man appears. The player who touches him first gains control of him. He will target the other players and any KOs by him will score points for the player who touched him. He's fairly easy to launch and defeat with a few strong attacks knocking him off the stage.

The bolded tracks must be unlocked and the italicized tracks are returning from a past game.

The Trophy in the 3DS version. 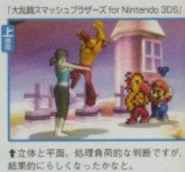 Scan of a magazine picture showing the 3D Flying Man.
Add a photo to this gallery

Retrieved from "https://nintendo.fandom.com/wiki/Magicant_(Super_Smash_Bros.)?oldid=522177"
Community content is available under CC-BY-SA unless otherwise noted.