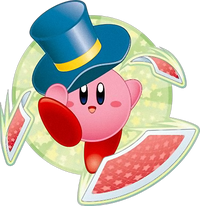 Magic Kirby is one of Kirby's copy abilities. It was introduced as a single use in Amazing Mirror, but was changed to a normal ability in Squeak Squad. This powerful ability can only be obtained from Boxy.

In The Amazing Mirror, Magic Kirby would display a roulette wheel which gives a random effect depending on where it landed. The effects were as follows

In Squeak Squad, Kirby also gets various magic tricks added to his arsenal like doves and cards.

Retrieved from "https://nintendo.fandom.com/wiki/Magic_Kirby?oldid=522579"
Community content is available under CC-BY-SA unless otherwise noted.