Madama Butterly, also known as the Mistress of Atrocity, is a powerful and wise demon renowned in Inferno for her brutality in combat. She is the demon who made a pact with Bayonetta. She is said to be the reincarnation of a woman who died tragically a long time ago. Madama Butterfly is also absurdly huge as she is shown to rival Temperantia in size when she is fully summoned and he is himself said to be the size of a medieval castle.

Not much is known about Madama Butterfly's past other than she is the reincarnation of a human who died long before the first game and that she offended Alraune over a millenia before Bayonetta 2 to the point where Alraune still want her death during the events of Bayonetta 2.

Madama Butterfly don't do much in the first game, we only learn that she is Bayonetta's contract holder. Her body never manifest fully and only her arms and feet are seen when Bayonetta uses her wicked weaves.

In Bayonetta 2, she can be summoned fully during the Umbran Climax and even during some finishing moves. She is summoned to face Temperantia in a fist fight during the first Masked Lumen fight, she is even controlable in a Punch Out!!-like fight in the last phase of the fight.

When Bayonetta question the reason of the betrayal of some demons when confronted by Pain, she thanks Madama Butterfly for keeping her part of the contract and the two exchange a brief fist bump. When she reach Alraune, Bayonetta summons Madama Butterfly to help her in her fight against the "Whisper of Dementia". When Madama Butterfly appears, Alraune reveal that she knew Madama Butterfly in the past and that the "Mistress of Atrocity" did something to cause her resentment for over a millenia.

In Super Smash Bros. for Nintendo 3DS/Wii U, she is part of Bayonetta's moveset and is summoned her smash attacks, additionally, she is seen as Bayonetta's shadow like in the Bayonetta series.

Madama Butterfly returns as part of Bayonetta's moveset in Super Smash Bros. Ultimate but this time she is also featured as a Legend Spirit and as such, she can be used to customize playable characters.

"A demon taking the form of a woman who left this world under unfortunate circumstances, only to be reincarnated in hell. Unlike her beautiful, swallotail butterfly-like appearance, this demon is particularly brutal, and her reputation is well known even amongst the denizens of Inferno. If a conjurer were to sign a contract and trade her soul, the demon would impart upon her enormous power and great wisdom." 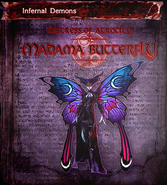 Madama Butterfly's page in the Book of Infernal Demons.

Madama Butterfly's summoned hand.
Add a photo to this gallery

Retrieved from "https://nintendo.fandom.com/wiki/Madama_Butterfly?oldid=527349"
Community content is available under CC-BY-SA unless otherwise noted.