Lylat Cruise is a stage found in Super Smash Bros. Brawl and the Wii U version of Super Smash Bros. for Nintendo 3DS/Wii U. It takes place in the Star Fox series, though the Pleiades is not a specific ship from the popular franchise. This stage features one main platform and three minor, pass through ones above it. The stage is known for having some of the most awe-inspring backgrounds; from hectic dog fights to peaceful flights through space.

The Lylat Cruise doesn't seem to be from any particular Star Fox video game. The name of the ship is apparently called the Pleiades, furthering the fact that this doesn't appear in any other video game (since no such a ship was named this in the games). Nevertheless, in the background you'll occasionally see Star Fox references, most notably the Great Fox from the series. The background of the stage mostly derives from the earlier stages of Star Fox: Assault. 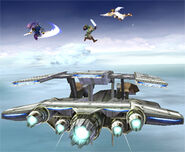 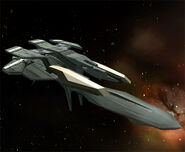 Omega form from Super Smash Smash Bros. for Wii U.
Add a photo to this gallery
Retrieved from "https://nintendo.fandom.com/wiki/Lylat_Cruise?oldid=522412"
Community content is available under CC-BY-SA unless otherwise noted.