Nintendo
Register
Don't have an account?
Sign In
Advertisement
in: Males, Class D articles, Articles in need of expanding,
and 15 more

The Luminary of Dragon Quest XI is an 18-year old from the village of Cobblestone. He is the reincarnation of an ancient hero who once saved the world. On his 18th birthday, Luminary sets out on his journey in order to fulfill his destiny.

Luminary is a young man with blue eyes and brown chin-length hair in a bob cut. On his left hand, he bears a mysterious mark that has appeared since the day he was born. The mark glows when the hero is in danger. He wears a long, sleeveless brown and purple leather tunic over a black long-sleeved shirt, brown trousers, and tan leather boots. Around his waist, he wears a leather belt with a small bag attached and he carries a scabbard across his back.

Luminary appears as a playable character for Super Smash Bros. Ultimate, renamed as Hero. He has the following Special Moves, which depend on a Mana Guage: 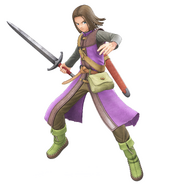 This Dragon Quest related article is a stub. Please help by expanding it.