As chronicled in Rosalina's Storybook, Luma was first met by a young Rosalina near a rusted spaceship; he explained to her that he was awaiting his mother, who was coming for him on a comet. Rosalina promised to wait with him, and the two eventually repaired the spaceship with the intent of using it to search for her themselves. As the pair travelled through the cosmos, they came across a comet made of ice and, though there was no sign of Luma's mother, decided to remain on it as they continued their search. One night, after dreaming of her own mother leaving her, Rosalina took Luma in her arms and adopted him as her own, promising to take care of him herself from then on.

Using materials they found frozen beneath the comet's ice, Rosalina and Luma constructed a house for themselves. Following the arrival of more of his kind from a nearby planet, Luma began to fight with them over Rosalina, who proceeded to welcome them into her new home and give names to them all. Some time later, when reminded of her former home and family, Rosalina became saddened once more - to cheer her up, Luma reminded her that her mother would always be a part of her and transformed into the Beacon, so that she would have a way of visiting her home planet every 100 years.

Many centuries later, Bowser attacks the observatory and steals the Grand Stars it requires to function - it is presumed that during the confrontation, the reborn Luma was knocked from his home and fell to the Mushroom Kingdom below. Luma is then found by Princess Peach, who invites Mario to her castle during the Star Festival to show him her discovery. After Mario is sent flying off into the cosmos by Kamek's attack, Peach sends Luma after him as her castle is towed away by Bowser's forces to the center of the universe.

Luma is formally introduced to Mario when he awakens on a planet within the Gateway Galaxy - after giving him a brief tutorial and a game of hide-and-seek, the star child determines Mario may be capable of helping Rosalina and joins him at his mother's request, taking up residence beneath the Mario Cap and in the process granting him the spin maneuver. Together, the two make their way through numerous galaxies and slowly reclaim the lost Power Stars, eventually returning enough power to the observatory's Beacon to allow themselves access to Bowser's Galaxy Reactor, where Mario uses Luma's powers to defeat the Koopa King once and for all.

Following Bowser's defeat and the rescue of the final Grand Star, the star it had already begun to form implodes on itself due to a lack of power - the ensuing black hole begins to rapidly consume the entire universe. Luma then appears from the Mario Cap and, after a wave goodbye, flings himself into the heart of the catastrophe, and is followed by the other Lumas. Their efforts succeed in stabilizing the black hole, destroying it and restoring the cosmos to their former state.

After the player collects all 120 Power Stars and defeats the final boss once more, a secret ending is displayed, in which Rosalina is shown thanking the player and promising to watch over them from beyond the stars before departing from the Gateway Galaxy in the observatory. The scene then shifts to the dilapidated spaceship from her storybook, with Luma peering out from inside; he waves once more at the camera before rising up toward the stars and out of sight.

Luma makes his second appearance in Super Mario Galaxy 2, where he is called Baby Luma. He is found in the Prologue of the game lying on the ground and immediately takes a shine to Mario. Baby Luma flies into the Mario Cap and Mario's body begins to tingle, giving him the power to spin. Mario later meets two other yellow Lumas which call Baby Luma "young master Luma" and send Mario off to the Sky Station Galaxy.

Baby Luma is later reunited with Lubba who thanks Mario for saving him and together, Mario and Baby Luma travel through many new galaxies to defeat Bowser once again.

After Bowser is defeated, Mario returns to Starship Mario with Princess Peach and the Grand Star, after which Rosalina appears in her Comet Observatory. She explains to Mario that she knew all along that she would someday be reunited with the Baby Luma, because there is a power even beyond that of the stars that governs the destiny of them all. After promising that he'll never ever forget about Mario and taking the Mario Cap as a souvenir, the Baby Luma rejoins Rosalina and leaves with her.

Luma, alongside other Lumas, appears in Super Mario-Kun volume 38 after Mario lands on a planet after he is swatted away by Bowser. He wants to play with Mario, but Mario does not want to do anything, after Mario loses his confidence. Just after Luma tries to encourage Mario to get up and save Peach, a giant Goomba comes. Luma wants Mario's help, though Mario refuses. Rosalina pops up and encourages Mario to fight the Goomba. Mario then learns the Star Spin technique and defeats the Goomba, who turns out to be just an illusion created by Rosalina to help Mario regain his confidence. They team up and help each other as the adventure progresses.

In this adaption, Luma calls himself "A Star Child". He is also given a mouth, mostly to illustrate facial expressions better. The cover also depicts Luma as a yellow Luma instead of a cream-colored one.

Lumas appear in Super Mario 3D World where they can be seen floating around in the world maps as well as various levels in bonus worlds. Their behavior has not changed from the previous Super Mario Galaxy games, though the player cannot talk to them.

In Mario Kart Wii, when playing as Rosalina (whom you can unlock by having a Super Mario Galaxy save file on your Wii), a Yellow Luma hovers around her at all times. It makes tiny noises whenever the player does an aerial trick or gets hit by an explosion.

Yellow Lumas appear in the Wii version of Mario & Sonic at the London 2012 Olympic Games in the Dream Spacewalk event. Here, they aid the athletes in defeating Dino Piranha. They first transform into Launch Stars that send the characters into space. Following this, they periodically appear to create rings that the athletes must all pass through in order to damage Dino Piranha.

In Fortune Street, Lumas appear in the unlockable Good Egg Galaxy board. A Luma can also be a customizable mascot for the player and is unlocked by placing first in all Mario series boards in the Standard Tour.

A Luma makes a debut as a playable character in Mario Tennis Open. He is a Technique-type player and can be unlocked by completing level 3 of the Galaxy Rally special game, where, in the special game, he rallies the ball against players. His racquet is turquoise with a picture of a Luma on it. Red, green, and turquoise Lumas appear as line judges in the Galaxy Arena court. Also, if the player uses Luma in the Galaxy Rally game, the opponent Luma is blue.

In Mario Tennis Aces, a yellow Luma appears during Rosalina's Tournament Finals introduction sequence. Also, when Rosalina uses her Special Shot, a yellow, green, and red Luma appear to each use a Star Spin to pass the ball to her.

A playable Luma also appears as a character available from January 2019, reprising his Technical type from his previous playable appearance.[4]

Lumas make their Mario Party debut in Mario Party: Island Tour for the Nintendo 3DS. Yellow Lumas populate the space-themed board Rocket Road where players travel from one space to another in small spaceships. One of them is also holding the checkered flag at the end of the board, while another hosts Battle Minigames. Also, when one of the characters reach the finish line and is congratulated by Rosalina, a yellow Luma, a pink Luma, and a blue Luma appear as well.

Luma appears in Mario Golf: World Tour, making a cameo in Rosalina's best post-hole animations. He is seen wearing Mario's cap like he does in the ending of Super Mario Galaxy 2.

Due to Mario Sports Superstars reusing Rosalina's golf animations from Mario Golf: World Tour, Luma reappears in this game in the same capacity.

Although Lumas themselves do not appear in Mario Kart 8 or Mario Kart 8 Deluxe, a Luma is seen in the logo of Galaxy Air and a Luma's artwork can be seen on the back of the Star Cup trophy. Lumas also appear in the scenery of GBA Ribbon Road included in the second DLC pack.

While no Lumas appear physically in Mario & Luigi: Paper Jam, a Battle Card depicts a Yellow Luma alongside Mario and Yoshi, taking their artwork from Super Mario Galaxy 2.

While not playable in the base game, graphics for a Dr. Luma have been extracted in Dr. Mario World.

Lumas come in a variety of different colors, some of which have abilities to help Mario or Luigi on his adventure.

"Mario found this lost little Luma. He grants Mario a mysterious power of the stars, which comes in handy as they explore the cosmos together!" 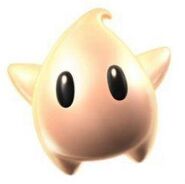 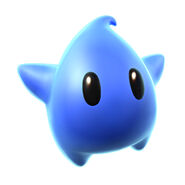 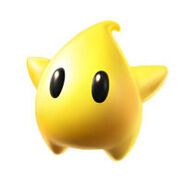 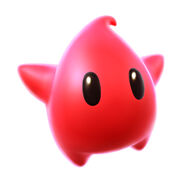 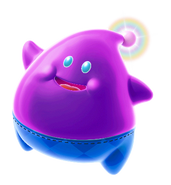